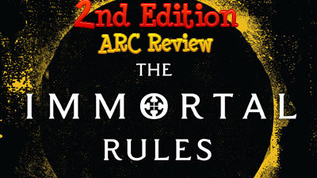 Ohh Yes I love this book, and I´m going to review
Blood of Eden #1 The Eternity Cure ina  couple of days YAY!!!! 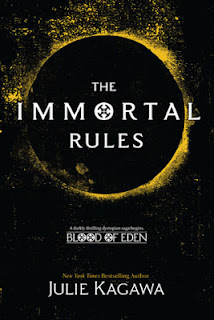 Allison Sekemoto survives in the Fringe, the outermost circle of a walled-in city. By day, she and her crew scavenge for food. By night, any one of them could be eaten. Some days, all that drives Allie is her hatred of them—the vampires who keep humans as blood cattle. Until the night Allie herself dies and becomes one of the monsters.

Forced to flee her city, Allie must pass for human as she joins a ragged group of pilgrims seeking a legend—a place that might have a cure for the disease that killed off most of civilization and created the rabids, the bloodthirsty creatures who threaten human and vampire alike. And soon Allie will have to decide what�andwho�is worth dying for…again.

Enter Julie Kagawa's dark and twisted world as an unforgettable journey begins
My Review
The idea of humans living in a world ruled by vampires has been played with a couple of times but never in this manner.
Vampire lords have cities where humans live and have to “feed” vampires regularly. In exchange for food tickets and if they don´t fulfill that duty the blood will be taken forcefully.
The social stratification in this book is fantastic; from the Vampire Master to the Unregistered, everything is described perfectly creating for the reader a clear picture of the world our main character Allie lives in.
Anyway lots of bad things happen and she ends up being the one thing she hate the most, a vampire. (Can´t say much, you know how I hate spoilers =D) Soo anyway, she ends up leaving the only place she´s ever known and goes out to the world. There she joins a band of humans that are looking for Eden a safe haven of sorts, and well things didn´t went accordingly to her plans, LOL!!!!
This book was fantastic, I loved that it wasn´t the same thing, there was no romanticizing vampires, in this book Vampires are on the top of the chain food and are bloodthirsty, intelligent, conning evil fuc****** ( Hell Yeah) I adored that.
The Plot is amazing and perfectly webbed not a single bad thing I can say o swear.
The characterization was spot on, Allie´s inner struggle and her interaction with the people/vampires around her was over the top.
The world building is just WOW, I can´t wait to see all that in a movie, it looks something worth of a James Cameron movie (In my World that´s HUGE!!!)
I´m super loving the author, she´s about to go into my all time, auto buy favorite Authors list. I swear I couldn´t find a single thing to criticize about this book, so yeah. Amazing, perfect, something everyone should read, something I´ll be def. rereading every time I can.
This book has been option for a movie and I can totally see why, because is amazing an material for a blockbuster movie.
So, go buy this book right now cause book two is about to be released!!!!!!!

Email ThisBlogThis!Share to TwitterShare to FacebookShare to Pinterest
at 10:55 AM