Hi guys welcome to my stop on the Hunter´s Moon Blog Tour, this book is awesomesauce so you better check it out if you like a pack of HAWT shifters and very strong female leads. Also the author has an amazing giveaway for you so look for the raffle and good luck!!!! 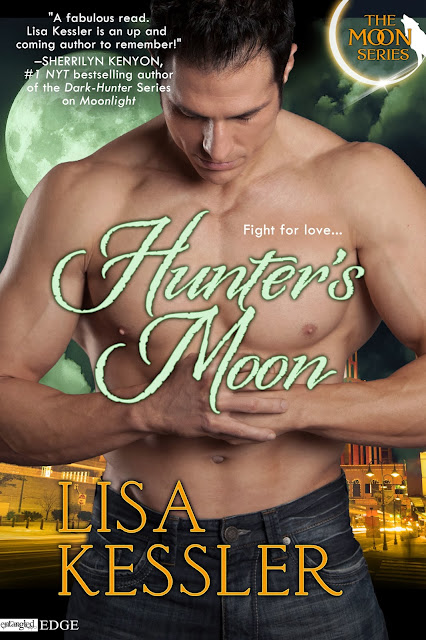 Sasha’s future was stolen from her the moment she was bitten. Now she's on the run from the Nero Organization that transformed her from a human detective into a shape shifting jaguar assassin.

When a rogue bounty hunter threatens her younger sister, she'll be forced to fight, and with nowhere else to turn, Sasha will need to trust the one man who has every reason to want her dead.

Aren is a werewolf with a secret. While protecting his twin brother and Alpha of the Pack, he found his one mate for life. Sadly she's also the jaguar assassin who tried to kill them both. Now Aren is struggling between his animal nature to love and protect her, and his loyalty to the Pack.

WOW just WOW!!!
I loved, loved this book so much, Sasha and Aren are a match made in heaven... well not exactly n heaven but dayum they are perfect for each other.
Sasha is a former cop that suffered from a series case of "My boyfriend screw me over" and now she is on the run trying to keep herself alive, her sister safe and her hormones controlled. not an easy thing to do when candy man wolf shifter Aren is after her and not precisely for battle; let's go to the mattresses has a new meaning and oh boy, WHAT a meaning!!!!!
Aren is a very sensible and loyal and he finds himself trapped between his loyalty to his family and his desire to have some one on one with a deadly jaguar assassin with a killer shot and when that woman is also his mate shit is going to fly and make a mess.
This book is amazing, sexy as hell and holly tamale perfect, I loved every second. it took me one day to fly through it and afterwards I was still awestruck. It´s so good that left me wishing for the next book ASAP.
The plot is very well planned  and has more twists and turns than a corkscrew, I was at the edge of my sit every second of it. Sasha and Aren are a power couple, they both have some screws loose and a temper but somehow they manage to even each other.
I wasn´t sure at first if I was going to like Sasha after everything she did and all the damage she caused to the pack but between her yoga lessons, her Lara Croft attitude and her love for her sister she managed to win me over. She really is an amazing female lead, a really tough chick, quick of mind and sure of herself and at the same time fragile and feminine when Aren is around.
There are no words to describe are other than... Please Lisa can I have him??? pretty please!!!! never thought that possessive, arrogant and overbearing could be qualities but dayum he makes it work.
This is one helluva book that is going to keep me (and my hub) awake for night to come (no pun intended); It´s action packed, sexy and perfectly weaved creating an emotional roller coaster that is sure to make your palms sweat.
Ohh and let me tell you I´m drooling over Gareth I can´t wait to see what happens to him. He is a lost soul but somehow someway he managed to catch my attention. I know there´s something very fierce and sexy underneath all that loner macho bravado.
I can´t wait to have the next book in my hands!!!!

I know you guys are dying to win this so go ahead and fill the raffle below
a Rafflecopter giveaway
Author Bio:

When she's not writing, Lisa is a professional vocalist, performing with the San Diego Opera as well as other musical theater companies in San Diego. You can learn more at http://Lisa-Kessler.com

Email ThisBlogThis!Share to TwitterShare to FacebookShare to Pinterest
at 10:19 PM