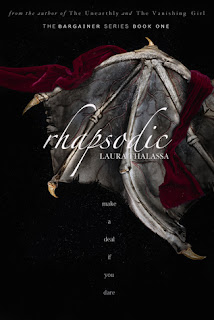 Callypso Lillis is a siren with a very big problem, one that stretches up her arm and far into her past. For the last seven years she’s been collecting a bracelet of black beads up her wrist, magical IOUs for favors she’s received. Only death or repayment will fulfill the obligations. Only then will the beads disappear.
Everyone knows that if you need a favor, you go to the Bargainer to make it happen. He’s a man who can get you anything you want... at a price. And everyone knows that sooner or later he always collects.
But for one of his clients, he’s never asked for repayment. Not until now. When Callie finds the fae king of the night in her room, a grin on his lips and a twinkle in his eye, she knows things are about to change. At first it’s just a chaste kiss—a single bead’s worth—and a promise for more.
For the Bargainer, it’s more than just a matter of rekindling an old romance. Something is happening in the Otherworld. Fae warriors are going missing one by one. Only the women are returned, each in a glass casket, a child clutched to their breast. And then there are the whispers among the slaves, whispers of an evil that’s been awoken.
If the Bargainer has any hope to save his people, he’ll need the help of the siren he spurned long ago. Only, his foe has a taste for exotic creatures, and Callie just happens to be one. 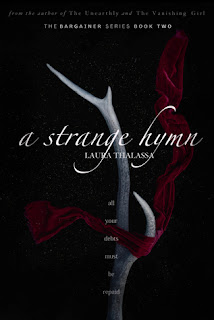 Siren and soulmate to the King of Night, Callypso Lillis survived the clutches of Karnon, the mad king, and his twisted prison. But the nightmare isn’t over. Callie wears the physical reminders of her time as a captive, and mounting evidence suggests the Thief of Souls is still out there.When a fae celebration thrusts Callie and her mate, Desmond Flynn, into the Kingdom of Flora, they take their investigation with them. But under the bright lights and striking blooms of the realm, they find there are more immediate issues to deal with. No place is more uniquely savage than the great fae halls, and no amount of bargains can save Callie from royal intrigues.Fairies play dangerous games. Some want love, some want vengeance, some want flesh, and some want things too unspeakable to utter. One thing is for sure: no one is who they appear to be. Not even Des, who only grows more enigmatic with every passing secret.But the Kingdom of Flora has its own secrets, from bleeding trees to branded slaves and missing guards. Something is stirring in the land of all that grows, and if Callie isn’t careful, it will claim everything and everyone she loves—and her along with it. 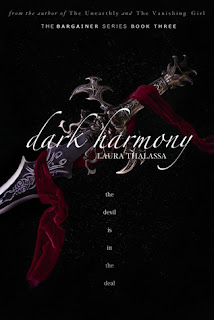 There are worse things than death. Things that lurk in the shadows and slip into your dreams. Things that have no business existing. Things that once slept … but have now awoken.
For Callypso Lillis, the fae magic that now runs through her veins is equal parts curse and good fortune. For the very thing that bonds her to Desmond Flynn, the King of the Night, also makes her vulnerable to the Thief of Souls, a man who wants to break the world … and Callie along with it.
But it’s not just the Thief whose shadow looms over the Otherworld. Des’s father is back from the dead, and he wants revenge on the son who sent him to the grave in the first place.
Des and Callie must figure out how to stop both men, and time is running out. Because there are forces at play working to tear the lovers apart once and for all … and unfortunately for them, death is no longer the worst thing to fear.

I don't know what it was about this book that compelled me to keep reading.
At first I wasn't sure I was going to finish it. The first few chapters where hard to get by. Not because is bad, the book is truly beautifully written I just couldn't get into the story.
I was maybe 3 chapters in when I got really intrigued and after that I couldn't put it down.
The bargainer is such an enigmatic character, you never know what he's up to other than it can be really bad or sinfully good.
Callie is a siren. A beautiful young woman with a troubled past that pushes through her insecurities to live her best life.
There's some dark topics that are mentioned here and there without being overly descriptive but we get the idea of when and what happened. There where times I got so angry for Callie, no child should ever be treated the way she was. I got mad and that's when I realized I was invested in the story.
Des and Callie are good for each other in the weirdest ways, despite the huge age difference they actually work together. I can't imagine Callie with anyone else. She's the good that's missing from Des's life and he's the spark that was missing from Callie's.
Callie is weird personality wise. She can be super self conscious about her looks and how she doesn't want to be a victim but always end up being one. But at the same time she's not cause she spends half the book doing the boom boom and training. Her Siren though it's super awesome I wish she was out full time. Her interactions with Des are super hawt and spicy. I love her.
Des I can't seem to figure out if I love or hate. He's super sweet and caring one second and the next he's scheming and keeping secrets. He's too manipulative but with "good intentions". He's fiercely protective and powerful. Like a huge peacock flaunting his feathers, he flaunts that body of his to have Callie do whatever he wishes.
I'm really liking the story and the hot scenes are super hawt. I love how their backstories are so similar it gives them a common ground. I jus wish there was a bit more info on how the Otherworld works, there are times that Des just through Callie in the middle of things she doesn't have a clue about and as protective as he is that kinda out of character.
I loved the ending. It was the sweetest thing ever.
Callie truly surprised me on this book, she's fierce and embraces her power with a vengeance. I loved her growth from broken girl to powerful woman.
Des will always be Des. He still keeps secrets even from Callie, but I have to admit that He does it all for a good reason.
I can't believe I ended up loving even the side characters that I know close to nothing about. Temper and Malaki should have their own book.
The thief of souls was down right creepy and at times I wondered if he was going to outsmart and outmaneuver Des and Cassie. He seemed an unbeatable force and I was truly worried.
I really enjoyed the story and the pace of it. It was sweet and super sexy, thrilling and agonizing. I was glued to the pages more so than the previous books.
The only reason I didn't give this book a 5 star rating is because I feel that some things were left unanswered or just glassed over but other than that it was pretty darn good. 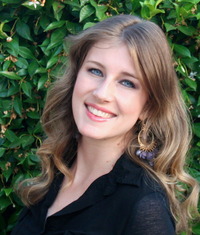 Found in the forest when she was young, Laura Thalassa was raised by fairies, kidnapped by werewolves, and given over to vampires as repayment for a hundred year debt. She’s been brought back to life twice, and, with a single kiss, she woke her true love from eternal sleep. She now lives happily ever after with her undead prince in a castle in the woods.
… or something like that anyway.
When not writing, Laura can be found scarfing down guacamole, hoarding chocolate for the apocalypse, or curled up on the couch with a good book.
Never want to miss a release? Sign up for my newsletter HERE
Like to discuss my books? Join my Goodreads fan page HERE or my Facebook fan page HERE
Official Site: http://www.laurathalassa.com/
Facebook: https://www.facebook.com/LauraThalassa/
Twitter: https://twitter.com/LauraThalassa
Instagram: https://www.instagram.com/laurathalassa/
Pinterest: https://www.pinterest.com/laurathalassa/
Google+: https://plus.google.com/+LauraThalassa/
Amazon: http://www.amazon.com/Laura-Thalassa/e/B00DN9YA3S/
Wattpad: https://www.wattpad.com/user/LauraThalassa
Email: laurathalassa.author@gmail.com

Email ThisBlogThis!Share to TwitterShare to FacebookShare to Pinterest
at 10:46 AM