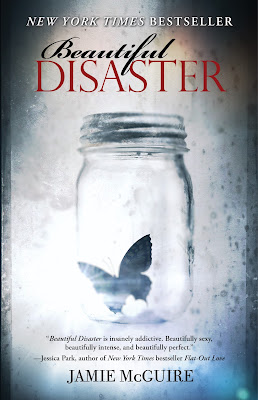 Book Info
File Size: 714 KB
Format: Paperback
Pages:  432
Publisher: Atria Books
Original edition (July 12, 2012)
Sold by: Simon and Schuster Digital Sales Inc
Language: English
ASIN: B008JMKN4Y
Synopsis
The new Abby Abernathy is a good girl. She doesn’t drink or swear, and she has the appropriate number of cardigans in her wardrobe. Abby believes she has enough distance from the darkness of her past, but when she arrives at college with her best friend, her path to a new beginning is quickly challenged by Eastern University’s Walking One-Night Stand. Travis Maddox, lean, cut, and covered in tattoos, is exactly what Abby wants—and needs—to avoid. He spends his nights winning money in a floating fight ring, and his days as the ultimate college campus charmer. Intrigued by Abby’s resistance to his appeal, Travis tricks her into his daily life with a simple bet. If he loses, he must remain abstinent for a month. If Abby loses, she must live in Travis’s apartment for the same amount of time. Either way, Travis has no idea that he has met his match. 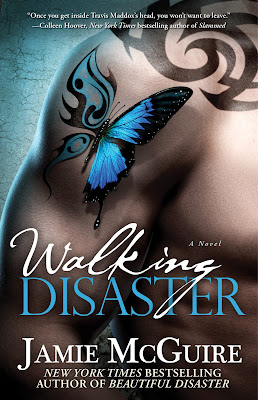 When a couple of days ago I became one of the 250 owners of an ARC of Walking Disaster I decided that I needed to buy Beautiful Disaster first and read them both back to back.
I was intrigued about this book for a long time so as soon as I found an excuse to read it I took it, bought a copy of this book and started this rollercoaster ride.
Beautiful Disaster is a contemporary romance about a girl called Abigail, she is running from her previous life and has decided the life she wants to have from that point forward, but once she lays eyes on Bad Boy extraordinaire Travis “Mad Dog” Maddox her little imaginary perfect world starts to crash.
Abby as a character is unbelievable funny, a smartass at heart with a very strong no bullshit personality. Her best friend America or “Mare” for short is the other side of her two girls against the world Team.  When she meets Eastern womanizer and he starts to follow her around she discovers a side of him that makes her fall for him hard and fast.
Travis is a man with issues; he has low self esteem and pent up rage!!!! When he meets Abby and realizes she´s different from every woman he has ever met he decides he wants to have her in his life no matter what.
I really liked BD and Travis is deliciously wicked in a sexy bad boy kinda way.  I´m ecstatic that I got the chance to read this books back to back cause after I finished BD I was left loving the book but with a feeling that I shouldn´t have.
Travis even though drool worthy has serious Issues that sometimes make me want to scream at Abby to run away as fast as she could and other times he was so loving and sweet that he was perfect.  I even thought a time or two that he was two seconds away of beating the crap out of Abbi, that’s how angry he would get damm right scary.
Their relationship was Toxic from every angle but still there was something about Travis that made me impossible to hate him and the book.
Once I finished BD I had an uncontrollable feeling, I needed to get more of Travis and that was a little unsettling cause let’s face it he´s not a boy I would take home. I would ogle him all day??... Hell Yeah!!!!! Be Fu** buddy  Hell no!!! and be in a relationship with someone like him would scare the crap out of me.
Anyway I grabbed WD and started reading, hanging on every word, once I got an inside view of Travis I decided he wasn´t bad at all he was perfect, a little damaged yes, but a perfect match for Abby all they had to do was sort out their issues and WOW.
Even though I knew how everything ended I couldn´t keep my eyes of the book, being inside of Travis head was amazing I think I liked his book more than Abby´s there´s something about him that pulls you in even though you know he´s bad news walking.
The fact that he oozes Sex helps a lot I can tell you *wide grin* no freaking complain there LOL!!!!!
The only thing that sort off rubbed me wrong was the ending to his book, won’t say a thing cause that would ruin it for you guys, but something about that ending just made go mee!!!
I would have been happy if certain Vegas scene wasn´t skipped over on his POV, but It wouldn´t be fair to drop a point for a decision the author made that doesn´t change the outcome of the story at all.
If I had rated this books separated Beautiful Disaster would  be a 3 maybe 3.5 stars and Walking Disaster would have been a 4 or 4.5 but as I read them together and that made me appreciated more due to both POV´s this books get a

Email ThisBlogThis!Share to TwitterShare to FacebookShare to Pinterest
at 9:53 AM