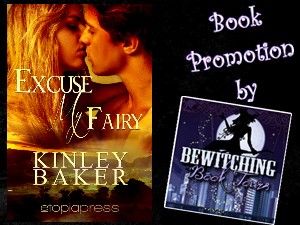 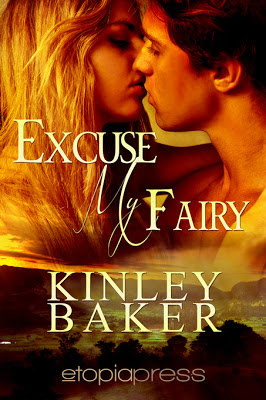 Excuse My Fairy
Kinley Baker
Book Description:
Her magic breaks all the rules. He breaks all of hers.

Draybeth is broken. Her fairy powers don’t work, her magic is completely dysfunctional, and not even her bad attitude and soft heart can win her back into Fairy favor. Exiled from their land, she struggles to make a life for herself in the human world. But when her bar burns to the ground and she meets one of the Impassables--the devastating Lawman Barrett--things become even more of a struggle. An arrest, murder, and abduction challenge everything she’s worked for, and worse, the Impassable Lawman appears to be her destined mate. But darkness stirs deep within Dray’s heart, and she’s not about to drag the gorgeous lawman down with her.

Barrett never expected to find himself mated to a fairy, let alone one with such a wicked temper and a short fuse. Being an Impassable, he should be immune to fairy magic, but Dray’s magic burns through him like lightning, just as everything else about her ignites him, body and soul. The fairy’s power over Impassables threatens everything this new realm was built upon, and as a Lawman, Barrett’s job is to make sure those threats are eliminated. But his feelings for Dray make him question just where his duty lies.
Goodreads: http://www.goodreads.com/book/show/16282631-excuse-my-fairy
Amazon   Barnes and  Noble   All Romance eBooks
Warning for adults 18+
contains a high heat level of sexiness and swearing
Sound really good right!!!, but hey don´t trust just my word on it, read this juicy excerpt and judge it =D

Excuse My Fairy
Excerpt:
A scream echoed down the hallway and reached Barrett at his desk. He knew they didn’t have a banshee in the vicinity, which always required extra precautions, but his eardrums had never met a sound more sinister than the bellow ringing in his ears.
Captain Syd stormed into the station room, his gaze locked on Barrett.
“Your fairy is driving everyone mad.”
Yep, Barrett had guessed right. His mate was causing a scene. Looked like Barrett would be forced to deal with the consequences.
The rest of the men and women at their desks studied his confrontation with the captain. They weren’t missing any details.
They all knew the fairy was Barrett’s problem, which would reasonably lead anyone to believe the two of them were involved in a relationship. Barrett’s place in the hierarchy among the men just dropped. He was probably going to lose his job.
Barrett pushed back from his desk. “I’ll go talk to her.” Damage control time. Maybe it wasn’t all over.
Captain Syd’s hot breath smacked him in the face. “You better not just talk to her. You better silence her!”
Barrett rarely heard the captain yell. This situation wasn’t going to be easy on anyone. Super.
With a scowl, Barrett headed for Dray. The woman had a sharp hook sunk into his chest. No matter how hard he tried to wiggle free of the catch, the hold buried deeper. She was his problem now. The captain had made the truth public.
Barrett strode toward the prisoner cells. The moment he entered the room, the fairy stopped screaming. He walked right up and glared at her. “What the hell do you think you’re doing?”
“Thank the heavens.” The hag two cells down stopped rubbing her temples.
Barrett chose to ignore the older woman.
Dray blinked at him, as wide-eyed and innocent as a doe. Barrett knew well enough not to be fooled.
“Do you have any idea what you’ve done?” Barrett’s own anger mounted.
“Tell me.” Dray threw the words out as though she didn’t have a care in the world.
“Everyone knows you’re my responsibility now.” His heart thudded at the admission. The statement wouldn’t go over well with his mate.
Dray’s eyes flared. “Embarrassed?”
That wasn’t even close to what Barrett felt. He had no idea how to put the chaos inside his chest into words. “You’re not making it easy to like you.”
“Ha! Feeling’s mutual.”
He should have known she would throw the sentiment back in his face. “I’m not your biggest fan, either, sugar.”
Dray snorted. “You couldn’t possibly dislike me as much as I dislike you.”
Now it was personal. “Listen, Beth—”
Her eyes bugged at the nickname. He’d seen her full name on her record.
He smirked. “If you think you can come into my station and run that sassy mouth like the Second Ending is coming and the world will parish without hearing your wisdom, you’re sadly mistaken. I should lock you up for the simple reason that someone thought it was a nice idea to match your surly little temper with those soft and sexy curves.”
Her mouth dropped open.
Using his index finger, he brushed his calloused skin against her soft chin and pushed up so her lips pressed together again. And in that insane moment, he wanted to kiss her.
She smacked his hand. Pain sizzled along his nerves. “If you ever touch me again, I’ll castrate you with my fingernails.”
He looked down at her short, efficient nails, and then back up at her. “You’re welcome to try.”
Her eyes flared, her power shifting behind her gaze. It had been a long time since he’d seen someone this riled. The little firecracker in front of him was set to burst.
“You’re just like every man I’ve ever met.” Dray turned her back on him.
Barrett couldn’t stop the spike of jealousy. How many men had there been? “You’re nothing like every woman I’ve met.” No one else drove him to this level of ball-busted crazy.
Dray’s shoulders hunched, and he couldn’t get a read on her. She refused to continue their conversation, and that was fine with him. He worried about what he might snap at her in his current mood.
His mobile buzzed, a welcomed distraction, and he quickly read the message.
“Jiva’s here to bail you out.” He had no idea how Jiva had known where her friend was. He hadn’t known how to get a hold of the succubus.
Dray continued to stare at the back wall. Barrett couldn’t see any part of her face. A moment of helplessness overwhelmed him. What was he supposed to do with this fairy? He had no idea how to proceed. “Be careful.” He couldn’t prevent himself from warning her. “Don’t go anywhere alone. The soul-sucker is still out there.” He’d never forgive himself if something happened to her, even if his temper peaked at his max.
She didn’t glance back or acknowledge him.
“Please, be careful.” His words scratched from a dry throat.
A long silence stretched. “I don’t need you to protect me.”
Her words struck him in the gut. Air puffed out of him. Rejection raged through him, uncontained. Wasn’t that the point? The little fairy didn’t need him at all. He chose to walk away then. She’d made it clear she wanted nothing to do with him. Maybe he would make it easy on her and just walk away for good.
He turned his back. No matter how much he wanted to give up on their torrid relationship, that wouldn’t be possible. It looked like they would both have to see this through to the end, whether that end included happiness or death. 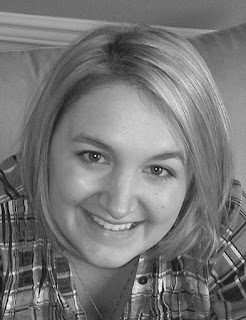 Kinley Baker has a terminally tender heart and an inconvenient sense of humor. She loves puppies and cries at celebrity weddings. Kinley believes that romance novels are the keys to world peace, because if you're holding a book, you can't be holding a gun. Kinley supports all supernatural lifestyles and believes "happy ever after" isn't only for the normal. Her books Ruined, Denied and Freed are available now from Crescent Moon Press. Excuse My Fairy is available now from Etopia Press. Look for more in the Misbehaving Magics series and the final book in the Shadowed Love trilogy in 2013.
www.kinleybaker.com
http://kinleybaker.wordpress.com
www.twitter.com/kinleybaker
www.facebook.com/kinleybaker
www.facebook.com/authorkinleybaker
www.goodreads.com/kinleybaker
My Review
Excuse my Fairy is the Second Book I´ve read form this author and I´m so glad I did,It´s a super quick read 180 pages give or take a fex, It´s sexy and steamy as hell and her characterization and plot develpment is so amazing that you can´t help but to bond with the characters and adore the story.
I was so exited when I realized that this book is part of a series called Misbehaving Magics, I can totally see myself looking for the next one, in fact I want it right now!!!!!
Dray and Barret are an amazing couple, but becoming a couple wasn´t actually easy no matter what destiny wanted for them. They bantered a lot, kinda like a modern Mr. Darcy & Elizabeth, hehehehe
They had to face lots of things together and after getting in LOTS of trouble one thing led to another... and I swear sparks starting flying, fireworks and everything!!!, it was intense and ... (fans herself)...
But don´t get me wrong this book is not only a paranormal romance althoug it´s a very GOOD, interetsing, amazing part of it.There´s somuch more to this book

Speaking of wich,I hope we get to learn more from Jiva!!!!, pretty pls, maybe the next book?, please!!!!

Email ThisBlogThis!Share to TwitterShare to FacebookShare to Pinterest
at 11:18 AM