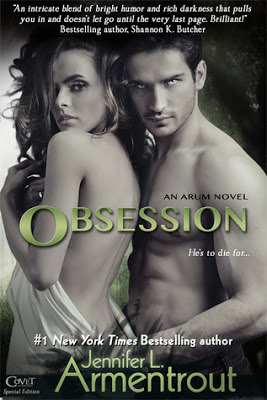 Book Info
File Size: 571 KB
Print Length: 247 pages
Publisher: Entangled: Covet
Published: May 31st 2013
Language: English
ASIN: B00CQYAWAG
Kindle Edition: 370 pages
Synopsis
This is a stand alone novel
that is an adult spin-off of
The Lux Series
He’s arrogant, domineering, and... To. Die. For.
Hunter is a ruthless killer. And the Department of Defense has him firmly in their grasp, which usually doesn’t chafe too badly because he gets to kill bad guys. Most of the time he enjoys his job. That is, until he’s saddled with something he’s never had to do before: protect a human from his mortal enemy.
Serena Cross didn’t believe her best friend when she claimed to have seen the son of a powerful senator turn into something... unnatural. Who would? But then she witnesses her friend’s murder at the hands of what can only be an alien, thrusting her into a world that will kill to protect their secret.
Hunter stirs Serena’s temper and her lust despite their differences. Soon he’s doing the unthinkable—breaking the rules he’s lived by, going against the government to keep Serena safe. But are the aliens and the government the biggest threats to Serena’s life… or is it Hunter?


You guys know how much i love Jennifer L. Armentrout´s Lux Series, without a doubt it´s one of my fav. Series ever. So you might that as a fan I had a couple of very incarnated ideas about both alien species. Like these.

Now I don´t have a clue why did I imagine the Arum like these ugly bastards, if Jennifer never said they where LOL; I think it was the all evil concept. You are evil there for you are ugly!!!! Boy was I wrong!!!

Not only did I find Arum… (well not all but some), really hawt, like really, really epic proportions, palm sweating, goosebumps rising, undies shacking HAWT

but also that everything isn´t as black and White as I thought, there´s a lot of grey in between for both species.

Beeing truly honest i wasn´t expecting to like hunter, he was so clearly the bad guy in my head, that I found it hard to believe that I could fall for him and his story. Hawt Damm!!!!

Hunter is sexy as hell, domineering, (wich I love), with him everything is, his way or the highway wich in this case is more of a suck the life out of you way LOL!!!

Serena is a hard ass chick, and I don´t mean it in the lets kick some ass kinda way, no. she´s a hard ass that can take everything life dish out to her and make the most out of it. She´s cool like that, she also doesn´t take bullshit from Hunter. wich was fan freaking tastic!!!! I had such a blast Reading this book!!!!

Jennifer must have a magic formula, she knows exactly what buttons to push on a female reader to make her fall maddly for the male lead, a fantastic trait if you ask me, cause at least in my book that makes her an autobuy autor cause  there´s no way in hell I wont like her books. she´s that awesome.
I loved the Little cameo of my fav. carácter ever, and even thought it was just a Little glimpse itt was enough to have me going crazy for the next book on the Lux Series!!!!

I loved, loved loved this book, but im sad cause I now want more and I have no clue if I´ll ever see Hunter and Serena agan, will there be more books?? will they appear at the Lux series, please throw me a bone im dying here!!!!!!!
the plot was just spot on, it was hard for me at first to wrap my head around the fact that not everything is as  it seeems, but then again even though it´s a make believe world, the characters are so real that I had no choice but to agree that yeah there´s good an evil everywhere. So once I accepted the fact that arum had the same potencial as the luxen for both good an evil it was a walk through the park LOL!!!

On a dif. subject my hubby loved the book too,... and he didn´t even read it, LOL!!! it´s easy to have your hub. happy when you read a chapter and end up like this.