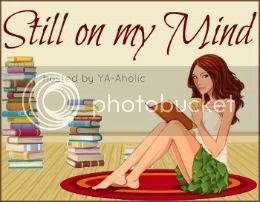 So how this meme works?

Every Thursday you will feature a book that you read months or even YEARS ago that was so good (or so scary/unique/funny..etc) that it is 'Still on my (your) Mind!'

This week´s Feature is
Vampire Academy by Richelle Mead

Goodreads Summary St. Vladimir’s Academy isn’t just any boarding school—it’s a hidden place where vampires are educated in the ways of magic and half-human teens train to protect them. Rose Hathaway is a Dhampir, a bodyguard for her best friend Lissa, a Moroi Vampire Princess. They’ve been on the run, but now they’re being dragged back to St. Vladimir’s—the very place where they’re most in danger...

Rose and Lissa become enmeshed in forbidden romance, the Academy’s ruthless social scene, and unspeakable nighttime rituals. But they must be careful lest the Strigoi—the world’s fiercest and most dangerous vampires—make Lissa one of them forever.

Why is this Book still on my Mind?

It´s been years since I read Vampire Academy and I think of it constantly, i wasn´t much of a reader back then but VA opened my eyes as to what I was missing. I loved  Rose attitude and snark, the idea of not being the helpless damisel in distress and actually been able to kick ass was exactly what I was looking for; Dimitri *sights* my oh my hehehe need i explain more? he was just perfect. His hot cold attitude had me drooling for him since the begining cause I knew deep down he was truly head over heels for her and the action good too.
I´ve read this book more times than i can count, would i read it again... Heck Yeah i´m always trying to get my Dimitri Fix hehehehe.
I´ve never actually reviewed this book, I read it way before I even thought about having my own blog, but it was def. worth to be my very first "Still On My Mind" feature.

Email ThisBlogThis!Share to TwitterShare to FacebookShare to Pinterest
at 6:05 PM

Labels: Meme, Still On My Mind