I´m sure the name Airicka Phoenix rings  bell, she´s been part of my blog a couple of times and she even made it to my Best of the Best 2012 list.

This time around, Im going to show you the cover of her new book...

Other Novels
~ Touching Smoke (Touch Series, book 1) ~ Whispered Beginnings: A Clever Fiction Anthology ~ Midnight Surrender Anthology
Synopsis:
Sophie has enough problems in her life without Spencer turning her blood to fire, without his eyes freezing and burning her, without his hatred of her. Since his migration into the house next to hers, Sophia Valdez isn’t sure whether she wants to toss him under a bus or kiss that smirking mouth of his. But even as the temperature rises around them, leaping flames of passion, want and desire,
everything either has ever known will be shattered by the lurking shadow hounding their every step, wanting revenge.

Spencer Rowth moves to the sleepy town of River Port with his mother and twelve year old sister, Suzy, to escape a deceitful father, an unfaithful girlfriend and a life crumbling much too fast for him to grapple onto only to be smacked upside the head by the last thing he wanted again. Sophie was everything he refused to want. Her temper, her wit, her laugh, her smile, the way her entire body goes up in flames under his hands are things he would rather slam a lid on and forget. Instead, he finds himself falling for the smart-mouth next door. But how long will he have before the evil chasing them catches up? How long before the very thing he never wanted becomes his only thread to sanity? And who is after them? What do they want and why do they want Spencer and Sophie dead?
Teaser:
“I hope that’s the last of our unlucky streak.”
Sophie couldn’t agree more, but something in the air, a chill, coiled around her, sinking razor sharp talons into her flesh. It trickled venom through her veins, paralyzing all hopes that tomorrow would be better. Truthfully, how could it be when the person responsible was still out there? What if they came back? What if they tried again? What if they did it to someone else?
No. Sophie had no delusions that it would be better tomorrow. She wasn’t fooled by the temporary calm. Two incidents simultaneously? Maybe the police didn’t spot the link, but she wasn’t so lucky nor could she rule out that possibility that Spencer was the center of it all. 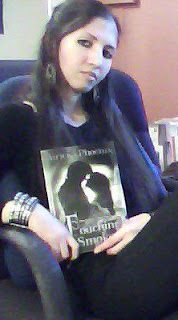 Email ThisBlogThis!Share to TwitterShare to FacebookShare to Pinterest
at 10:10 PM