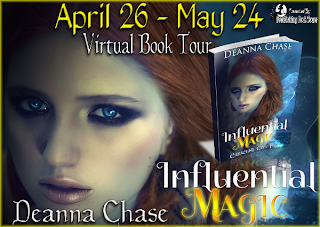 Hi guys today is my stop on the Influential Magic Blog Tour and let me tell you guys that this book is super fun. I read Influential Magic in one sitting is a very light, easy fun read, and I enjoyed it a lot!!!!.
so I heard Blog Tour and I was all like Hecl yeah!!! I want in, and well here we are LOL!!!.
Today I have obviously my review, a wicked excerpt and the best giveaway ever (well actually the author is doing the giveaway hehehe i´m just sharing the rafflecopter LUV... 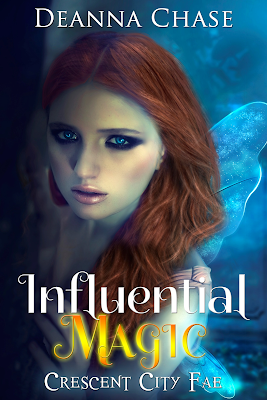 
It’s tough being a faery in New Orleans, a city fraught with vampires… especially when their very existence drains your life-force. Willow Rhoswen, owner of The Fated Cupcake and part-time vampire hunter for the Void is having a rough week. Four years after her twin brother’s mysterious death, Willow’s life is threatened and the director saddles her with a new partner—her ex-boyfriend, David. To her horror, he’s turned vamp, which causes her physical pain whenever she touches him… and any other specimen of the undead. In order to save Willow’s life, David agrees to turn double agent against the most powerful vampire organization in New Orleans. Or so he says. And she’s convinced they know something about her brother’s death. Unsure where David’s loyalties lie, she turns to Talisen, her childhood crush, to help her solve the mystery. Caught between two gorgeous men and a director who’ll stop at nothing to control Willow’s gifts, she’ll have to follow her instincts and learn who to trust. Otherwise, she risks losing more than just her life.
Check out this amazing Excerpt
Excerpt.
I fingered the thick, weighted envelope, grimacing at the blood-red wax seal. I supposed the old ones felt nostalgia for social etiquette of times past. But seriously? They carried iPhones just like everyone else. What was wrong with a phone call or an email? Of course, modern methods wouldn’t have been as dramatic.
Damn vampires.
I grabbed my antique silver letter opener and carefully broke the seal, trying not to alter it any more than necessary. If there were any lingering energy traces, I might need them later.
One elegant line was scrawled across the textured stationery.
Your honored presence is required at eight o’clock tonight at The Red Door.
Required, not requested. It wasn’t an invitation. It was a summons. And not one I could likely ignore. The Cryrique held political clout in the city. Pissing them off would only put me out of business.
Did this have anything to do with the Influence drug? My stomach turned. I was the only one in the city powerful enough to enhance the plants needed to create the narcotic. If they wanted an inside track, I was the logical choice. And the most obvious.
The phone rang, startling me out of my worried haze, and the note slipped from my fingers, landing on the desk.
Hopefully it was Phoebe with information on the messenger. I’d faxed the details to her a half hour ago.
I picked up the old-fashioned rotary phone. “The Fated Cupcake.”
“Ms. Rhoswen, you got my note, I presume,” a southern gentleman’s voice drawled.
My heart stopped. “Who is this?” I asked through clenched teeth.
He chuckled softly. “I understand you have something of mine.”
“I can’t imagine what that would be.” What the hell was he talking about?
“Not a what, a who, Ms. Rhoswen. Bring Davidson with you this evening. I look forward to our new friendship.” The line went dead with the unmistakable clatter of a phone coming to rest in its cradle. No iPhone for this vampire.
Davidson? David?
Why would the Cryrique think I had David? Phoebe said he’d cut a deal. He should’ve been home by now.
He cut a deal. Oh no…
With everything going on, I’d completely forgotten about my new assignment with the double agent. I yanked the legal envelope open and stared at the name of my new partner.
Davidson Laveaux.
“F’ing Maude!” I shrieked. With a start, Link jumped from a sound sleep, growling, his eyes glowing gold as he scanned for intruders.
“Sorry, boy. It’s okay. No one’s here but me.”
Link paced, responding to the anger in my voice.
I scanned the document, finding the classification. Sensitive: twenty-four hour detail. The Void wasn’t messing around. Whatever they were after, they meant business.
“Damn it all. How in the world am I going to spend twenty-four hours a day with a vampire?” A vampire who’d seen me naked on several occasions. I slumped in my chair, wishing I could turn the clock back thirty-six hours. Even if it meant being back in my mother’s house.
Heaving a sigh, I returned my attention to the file. What did David have to offer as a double agent, and why did Maude put me on the case? My only notable skill was locating vampires.
Then I turned the page and found my answer. Vampire Laveaux overheard a plot to abduct Agent Rhoswen. Reason unknown.
Giveaway Time
Tour Wide Giveaway.
One tote bag with a notebook, keychain and signed copy of Influential Magic
One notebook, keychain and signed copy of Influential Magic
3 keychains and signed copies of Influential Magic
5 signed print copies of Influential Magic
10 ebook copies of Influential Magic
Physical prizes open to US Shipping
a Rafflecopter giveaway

WOW just WOW, this book was amazing, fun, fast paced and a very easy read I enjoyed every second of it.
Willow is adorable and her relationship with her witch BFF is hilarious Phoeebe is the perfect sidekick character. I really enjoyed her a lot.
Now we all know I wouldn´t be as exited as I am about a book if it didn´t have two things I can´t do without, sexy vampires and an incredible HAWT, strong, protective, and smexy male lead. so yeah namely
David and Talisen...

they are that good!!! David is Willow´s ex, that left her hanging a while back and now is back and well we really don´t know what his deal is until later in the book but OMG he´s just completly edible. what can I say. Oh yeah I know
I´m a Vamp girl.
Talisen, Talisen, Talisen!!! who would have thought that a faery could be so, perfect!!! I spent the whole book ting and praying that Willow would pick hi at the end. Cause lets face it he i abso. perfect for her. Well, for me too but that´s another stor LOL!!!
Now you want to know what was the best part of the book? Link!!! that damm Shih Tzu rocks. have you ever Heard that things are not always what they seem? well that completly applies to Link; he is the biggest, meaniest, scariest Wolf ever born. He´s Willow protector and just WOW. Kudos to the author for an amazing imagination.
This book has lots of twist and turns and is an amazing example of what the fsrt book in a series should be. Exiting and engaging it left me wanting to know more about all the characters, cause I ended up loving them all.
I can´t wait to see Phoebe find a guy that,  well,  makes her behave LOL!!!! yeah like that´s ever going to happen.
Anyway the love triangle wasn´t forced it came natural and I loved it even though I hate triangles.  I would have been quite happe regardless of wich guy Willow ended up with cause i love them both. But her desitions where natural and toook her in the right path for her.
This book is a must read and this author is one to look for. 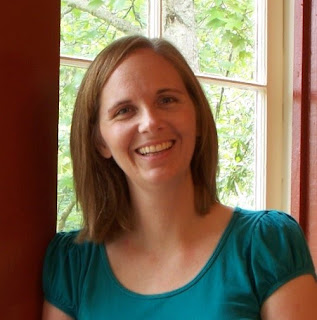 Deanna is a native Californian, transplanted to the slower paced lifestyle of southeastern Louisiana.

When she isn't writing, she is often goofing off with her husband in New Orleans, playing with her two shih tzu dogs, making glass beads, or out hocking her wares at various bead shows across the country.
For more information and updates on newest releases visit her website at www.deannachase.com