Fire in the Blood by Robyn Bachar Blog Tour 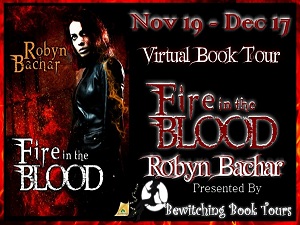 Hello there, today I´m part on the Fire in the Blood Book Tour and let me tell you guys this books is def.  is good. the writting style is unique and engaging plus the story s super interesting. 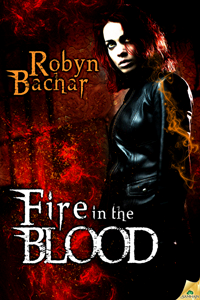 Ghosts can’t physically interact with the world of the living, and moving objects and slamming doors are usually the result of demonic activity. (Sometimes it’s faeries with nothing better to do, but that’s rare.)Fire in the Blood

Patience Roberts is the last summoner standing between magiciankind and certain demon invasion. After banishing two or three demons a day for too long, gods know she’d like nothing better than a little down time with her number one distraction—Faust.

But with vampires, hunters and assassins lined up to take her out, who has the time? Still, she has to admit her resistance to the amorous faerie is wearing thin. Not that she’ll ever let on—after all, faeries are notorious for their short romantic attention spans.

Faust, a Shadowspawn faerie, watched as his outcast clan dwindled to nothing. Determined to hold on to the woman he loves, he’ll do whatever it takes to protect Patience. And one day build a life with her.

When an old demon enemy punches through the barrier between the worlds, Patience must draw on every ounce of her reputation as a cast-iron bitch to temporarily banish him. To get rid of him for good, she’ll have to sacrifice one too many pieces of her soul to leave room for love… 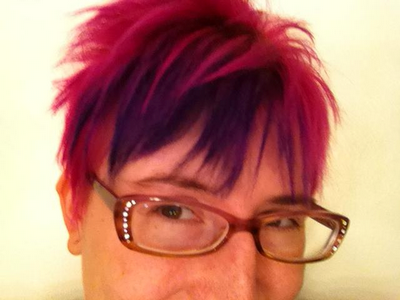 About the Author:
Robyn Bachar was born and raised in Berwyn, Illinois, and loves all things related to Chicago, from the Cubs to the pizza. It seemed only natural to combine it with her love of fantasy, and tell stories of witches and vampires in the Chicagoland area. As a gamer, Robyn has spent many hours rolling dice, playing rock-paper-scissors, and slaying creatures in MMPORGs.


“You still haven’t eaten,” Harvey reminded after I hung up the phone.
“Drive through. Don’t let me forget.”
“You said that this morning.”
“I did?” I asked in surprise.
“Yes, you did.”
Damn it all to hell and back, my brain must really be fried, because I had zero memory of that. At least I’d been chugging black coffee all day, so there was something in my system, even if it was only caffeine. I couldn’t keep up this pace for much longer, but I didn’t have a choice. I was the only one left to handle the demon problem. I’d tried to call in extra help from the coasts, and everyone turned me down. They were too afraid of the hunters, and though I couldn’t blame them for that, it still pissed me off. I outsourced what work I could to the local guardians, but it wasn’t enough. They weren’t specialists like me.
I was trying to bail out the Titanic with a teaspoon. It was only a matter of time before we all drowned.
“Well, this time I mean it,” I said lamely.
“Of course, Mistress.”
I grabbed my black cashmere coat from the rack and donned it along with my scarf, then slung my messenger bag over my shoulder. This time I made it halfway across the room before I was stopped, but it wasn’t the phone that interrupted me. It was a faerie invasion, and I had only a moment to recognize Faust by the smoky lenses of his round, dark glasses before he pounced on me. He kissed me fiercely and nudged me back until I stumbled into the front of my desk.
“I dislike this overcoat. It’s much too bulky.” He reached for the buttons and I batted his hand away.
“I’ll be in the car, Mistress,” Harvey called out loudly before vanishing. He’s not a voyeur, and he disapproved of my relationship with Faust. I didn’t approve of my relationship with Faust either. Every summoner knows you shouldn’t get involved with a faerie, because it always ends badly.
“Cut it out. I’m on a call,” I warned.
Faust grinned, and my chest tightened with an emotion I fought not to show. Yes, this was headed toward disaster, but I couldn’t help myself. Faust was the most addictive temptation I’d ever met. He was just so damn pretty—tall for a faerie, which made him about my height, and dark haired with a pale complexion that spoke more of a vampire than a faerie. Faust had an angular face with high, sharp cheekbones that reminded me a bit of a runway model, a finely-drawn brow and a smile that could make a girl weak in the knees in 0.5 seconds.
“It can’t wait,” he insisted. “I’ve missed you.”
He tugged my scarf aside and kissed my neck, and it was suddenly much too warm to be wearing my coat. I didn’t fight him as he unbuttoned the garment and slid it off. I kissed him and indulged in the lovely diversion of letting his nimble hands roam for a few moments, because the past few days had been all business and no pleasure. But I had an appointment to keep, and I pushed him away with a disappointed sigh.
“I missed you too, babe, but I don’t have time for a break. I’m on call 24/7 now.”
“I know you are.” Faust’s expression sobered, and he caressed my cheek. “You’re a brave woman, Patience, and I admire that about you. But that’s also why I’m here.”
“You’re here because you admire me? Funny, seemed more like desire a second ago,” I teased. The corners of his mouth twitched, and I bit back the urge to kiss him. Experience had taught me that if I encouraged him I’d end up naked and bent over the desk.
“There’s a problem—” he began, and I cut him off.
“I don’t have time for more problems. We’re all full up here.”
“This is serious. Zachary has hired someone to kill you.”
*****


Oh my!!! murder...  sounds good right, well it is. I wont share any specifics until I finish this baby but so far im pretty sure that Fire by Blood is going to get a 5 star review, cause it has being a fantastic read.
Anyway instead of posting my review today, wich im going to do maybe tomorow or the next day depending on how fast can i get my boss of my back =D. I want to share some quotes that I really, really liked.
Happy Reading!!!
*****
"hosts can’t physically interact with the world of the living, and moving objects and slamming doors are usually the result of demonic activity. (Sometimes it’s faeries with nothing better to do, but that’s rare.) "
" was trying to bail out the Titanic with a teaspoon. It was only a matter of time before we all drowned. "

" flipped the lights on and smirked at the sight of an enormous whirlpool tub. Normally I’m the quick-shower type, but that had fun potential. I could get clean while being dirty at the same time… "

Email ThisBlogThis!Share to TwitterShare to FacebookShare to Pinterest
at 6:28 AM