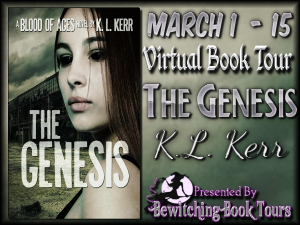 Welcome to my stop on The Genesis Blog Tour, Today K.L.Kerr is going to drop by and show us a super cool deleted scene from The Genesis but first I want to show you a bit about this book. I also have a giveaway for you one ebook of this title, no raffle this time just leave a comment on this post letting me know what you thought of the excerpt and or the deleted scene and thats it!!!! 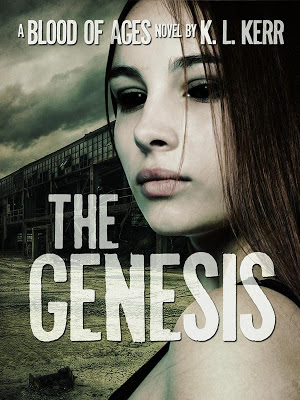 
The vampires of Dayson city are preparing for war. Having lived in constant fear of the Archway Corporation for decades, desperation has forced them into action. Their solution is to bring the First vampire, Alistair, back from the dead, a warrior famed for eradicating entire armies in the name of his kind.
For fledgling vampire Catrina Malinka, the fabled return of some unknown deity falls low on her list of concerns. Between fending off strangers trying to kill her in her dreams and trying to rein in an uncontrollable power that no one else even understands let alone shares, Catrina is forced to fight her assumed role in the war against Archway, which threatens to send her down a path she doesn’t want to travel.
The first book in The Blood of Ages series, “The Genesis” is an urban fantasy about the inescapable nature of Fate and the corruption of power. 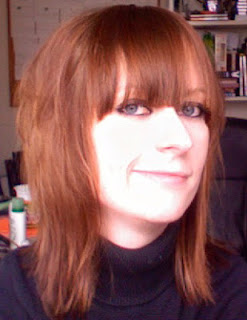 Born and raised close to North York Moors, initial setting of American Werewolf in London, one might be excused for thinking K. L. Kerr's interests might lie with those furry beasts. But she has always preferred monsters of the fanged variety, having written the very first draft of her novel, The Genesis, aged sixteen. When not writing, Kerr can be found playing the MMORPG, World of Warcraft, or listening to music from video game soundtracks.

She still lives in the North of England, close to The Moors (keeping to the roads, naturally), with two cats who--like all cats--think they're people.