Hi guys I´m extatic that I´m able to share this with you.
When I heard a while back that Janelle Stalder was starting new series I  jumped around in all my fan girl glory.

It´s no secret I´m a huge fan of her Eden Series, *coff, coff I love Wolf coff,coff* so to have the opportunity to fall in love with another of her characters was an amazing opportunity.
After a lot of begging and stalking *on my part* the author very kindly *I´m guessing to get me off her back* agreed to let me be her Beta reader for this book, and OMG!!!!!
It´s seriously the best book I´ve read from her I was already a fan but just WOW, there are no words to describe how good Switch is.
Check it out!!! 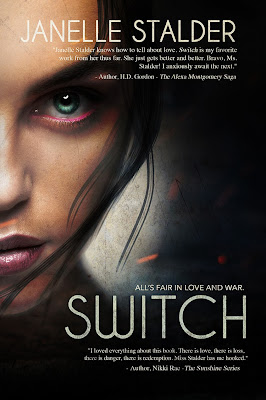 All’s fair in love and war.


Two thirds of the world's population has been wiped out, devastated by the worst war earth has ever seen. Still standing amongst the ruins is a mind reader who finds herself on the wrong side of the war. Everyone does what they must to survive. When the rebels bent on bringing down the New World leader start to rise up, it is her job to make sure they stay down where they belong. That is, until one rebel sneaks past her defences and into her heart. Love will blossom from the ashes, but will it be enough to save them, or will it mean the end of them both?

This Book is Epic there´s no other way to say it, amazing wont cover it I swear, and look at the cover, I´m in love and I need this book on my shelve right now!!!!!
Janelle Stalder is an amazing Story teller that managed to grab my attention from the very firts page of thebook. The story is so perfectly created that you are sucked in no matter what.
This Book has a sort of Romeo & Juliet feel but in a very sexy, dark and dangerous way.
The world around Charlotte crumbles at her feet and with no choices left she gets dragged into the middle of a war between the rebels and the Rulers of the new world and just when she thinks she knows it all and nothing can surprise her anymore... In comes Pete...

When I first saw Pete my fist thought was... "Wolf who?"... heck yeah Pete easily made Wolf from the Eden Series look like a boy  scout I just can´t described how amazing this character is, all I can say is I fell for him hard. He´s the perfect mix between a Mr.Goody two shoes and a Sexy wild  Bad Boy.
The World Building is one of a kind Janelle has an eye for detail that without being overly descriptive can show you exactly what she wants, It´s amazing how easily she can make me picture everything that happens around the characters from the look of a building to a voice, everything is designed to trap your attention.
What I liked the most about the book is that It kept me guessing, every time I thought I had figured the whole thing out something ahppened and BAM!!! I was turned into a turmoil that left menooption but to keep guessing, no way was I ever figuring out what the author had planned.

Switch is Janelle´s Grand Slam I swear, she is an amazing writter and every day with every book she gets better,I can´t wait and see what she does with this series. The Dystopian Genre  Has a new Queen and Janelle Stalder is her name!!!!
Suzanne Collins and Verónica Roth should watch out Cause Janelle Stalder is here to Stay!!!! 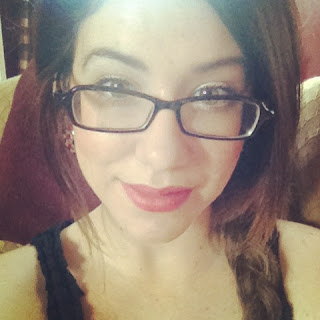 Janelle Stalder was born and raised in Brampton, Ontario. At an early age she developed a love for literature. Her debut novel, Eden, was the first book in a series of four, released in September of 2011. The second book, Eden-West, was released in July of 2012, and the third book, Eden-South was released in March of 2013. The fourth book of the Eden Series, Eden-East, will be release at the end of 2013. She is a strong supporter of other independent authors, and loves to interact with her readers. When she's not writing, Janelle is at home with her husband, two children, Aiden and Elora, and her two furry children, Alice and Lily. She now resides in the small town in Ontario in her old, possibly haunted, century home.

Email ThisBlogThis!Share to TwitterShare to FacebookShare to Pinterest
at 1:25 PM