Can the Earl of Kelthorne and a mere songstress from an acting troupe
find lasting love in the wilds of Somerset?


You guys need to read Wicked and Wonderful by Valerie King to find out!!! 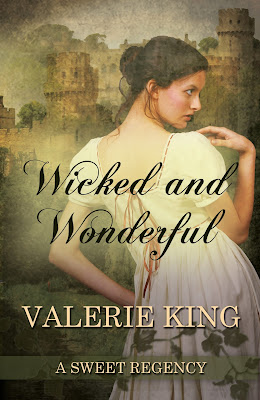 Her heart may long for more…
Judith Lovington escaped a vile man years ago and found sanctuary in a traveling troupe of actors. Fending off the unwanted attentions of rakish gentlemen has become second nature to her. But when Lord Kelthorne begins his assault, never has temptation been stronger. How will she withstand his heated kisses when he represents all that she lost so many years ago and all that she desires now?
But his wicked intentions drive her into his arms…
Kelthorne meant only to have a little fun when he first caught and kissed Judith in his apple orchard. Though intent on mending his ways and marrying a proper young miss, he can’t forget the lovely songstress and sets out to break down her every reserve. As he takes his stolen kisses, however, his clever seductions begin working on his own heart. Will he surrender to love at long last?
Buy Links:
AMAZON
BARNES &NOBLE
Social Media Links:
Website
Facebook
Twitter
Here is an amazing excerpt from chapter one
“Foolish, foolish dare!”
Judith Lovington raced through the orchard, stolen apples caught in her thick wool scarf. At the far end of the orchard, a man on horseback rode parallel to her position.
She had erred wretchedly and knew quite well that if she could see him, even though only leaf-shaped bits of moonlight were scattered on the ground, then he could most certainly see her. What rotten luck that this man had chosen to ride his horse at so late an hour, and at that in an orchard.
She watched his head rise. She stood very still hoping that perhaps the dark, boy’s clothing she was wearing, borrowed from the troupe’s vast store of costumes, would make her but a shadow in the orchard. Her heart pounded as she waited. Suddenly, he spurred his horse in her direction. He had seen her.
She groaned, pushed her hat down hard about her ears, turned around abruptly and began to run. All the while, stolen apples dropped to the ground in dull thuds from the shawl clutched to her chest. How could she have allowed herself to be persuaded to enter the Earl of Kelthorne’s orchard in the first place.
She stumbled more than once but managed to right herself and keep running.
From behind, the man yelled after her, none too politely. “Stay a moment, young halfling. A word with you, and then my riding crop, for I promise you I mean to beat you within an inch of your life. At the very least twill mean the stocks for you and I will only now be made content by throwing half a dozen cabbages at your head.”
The man, whose diction bespoke the gentleman, was clearly outraged by her crime. Stealing was a terrible crime and often punished by the severest methods. She should never have allowed Charles Hemyock to provoke her to the deed. From his first joining the troupe nearly a year past, he had barely had a civil word for her. He was arrogant and cruel, and she did not like him above half. But when he had called her a worthless female with little wit and no bottom at all, just like all the other females of the dramatic troupe, she felt obligated to vindicate not just herself, but her sex as well.
So he had dared her to collect a dozen apples from Kelthorne’s orchard and she had accepted his challenge. Although she now thought he may have been right about her lack of wit, certainly her lack of sense, for here she was, being chased by a man intent on doing her serious injury and in some danger of being brought before a magistrate. Visions of dangling from Tyburn Tree pressed her to move faster still.
She glanced back again. He would be on her in a trice for she could hardly outrun his horse. Still, she ran, slipping through the orchard sideways, moving from row to row of thickly-leafed trees in hopes of forcing him from his horse. She might then have a chance to escape, for the nearby hill was thick with growth and she knew how to hide. She had at the very least some practice in that skill.
As she neared the edge of the orchard, she glanced again and saw that she had made some progress. He was having difficulty, just as she had hoped, navigating his horse after her. She felt a sudden rush of exhilaration believing she now had a chance to escape when she heard a terrible sound, the deep bark of a large dog, not too far distant.
If the hound caught her, she would be in the basket, indeed.
Glancing once more over her shoulder, she saw moonlight glint off the dusky coat of a bounding dog heading in her direction. Her heart sank as fear engulfed her chest. She ran faster still. She dropped the rest of the apples as well as her shawl. She raced for the woods. She did not know how she might escape now, but she meant to make every effort.
She held to the last vestige of hope until she heard the wheezing of the dog behind her and suddenly found herself shoved forward, then landing, fortunately, on a patch of grassy turf at the very edge of the orchard.
“Rufus!” the man shouted from a distance. “Desist!”
Judith found herself pressed to the ground. The big dog was standing on her back. At the same time, she covered her face with her arms fearing that she would soon feel the creature’s teeth tearing at her flesh. Her heart pounded in her chest so that the top of her head hurt. She felt dizzy and more frightened than she had in her entire life, even more than on the day she had run away from home some eight years earlier. Had death come to her at last?

I hope you enjoyed this excerpt from WICKED AND WONDERFUL!  To read the entire first chapter click HERE

First of all I need to say that I´m not a fan of Regency books, but Wicked and Wonderful was quite enjoyable, I have a lot of friends that love the genre, I had an amazing time Reading this title and would read any book from this author without a doubt.
The world building was amazing, it was easy for me to get lost on the story and picture everything that was going on with and around the characters. Watching the interaction of the Troupe gave me a sense of family and camaraderie that trapped me and made me fall in love withall of the characters.
Without a doubt this is one of the most enjoyable reads I´ve had the pleasure to do, it was so sweet and ringed so true that I had a hard time putting the book down.

Judith is an easily relatable character, you can´t help but to fall in love with her after all that she has endure.  Aubrey wasn´t as easy but at the end the man that he is, is what makes the whole story more interesting and real.

Several of the Side characters are very easy to connect to, such as Laurence and Miss Currivard, they were amazing, easily likable and fun.

The story is perfectly weaved, it has very good moments that I feel where well thought and planned, I wouldn´t change a letter from this book. I was hooked from the start.
I´m very enamored of the cadence and properness of the dialogues, even if a reader is not used to reading this genre is very easy to get lost on the romanticism and at the same time the dialogue pulls you into another world, I´m not embarrased to say that I dreamed of the Ball Season, big dresses and fine cultured gentlemen.
I liked this book very very much.

The actual rating would be 4.5 starts....mhhh maybe I need to start working on my half stars  graphic.