Dare you to by Katie McGarry ARC Review 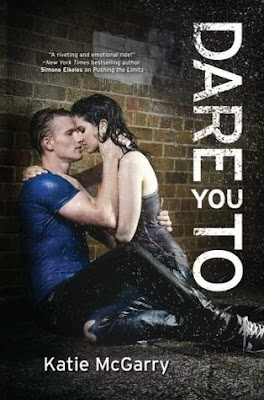 
Ryan lowers his lips to my ear. "Dance with me, Beth."

"No." I whisper the reply. I hate him and I hate myself for wanting him to touch me again....

If anyone knew the truth about Beth Risk's home life, they'd send her mother to jail and seventeen-year-old Beth who knows where. So she protects her mom at all costs. Until the day her uncle swoops in and forces Beth to choose between her mom's freedom and her own happiness. That's how Beth finds herself living with an aunt who doesn't want her and going to a school that doesn't understand her. At all. Except for the one guy who shouldn't get her, but does....

Ryan Stone is the town golden boy, a popular baseball star jock-with secrets he can't tell anyone. Not even the friends he shares everything with, including the constant dares to do crazy things. The craziest? Asking out the Skater girl who couldn't be less interested in him.

But what begins as a dare becomes an intense attraction neither Ryan nor Beth expected. Suddenly, the boy with the flawless image risks his dreams-and his life-for the girl he loves, and the girl who won't let anyone get too close is daring herself to want it all....

First I want to thank Netgalley, who gave me this title in exchange of an honest review.
Have you ever found a book that you can´t actually know if you liked it or not?
That´s what happened here.
It took me about 4 days to finish this book, that, for me is a long time.
It´s not that the book is bad but i did find it overly dramatic and full of cliches even though there was role reversal.
instead of a bad boy with a good heart we have a bad girl
instead of a virgen princess he get a ........ prince
he´s golden boy extraordinare
Pitcher instead of quarterback
and you have your every day story
It even made remember a movie I saw ages ago. Freddy Prince Jr. makes a bet with his friends about a girl and he ends up falling in love with said girl. pretty cool movie BTW.
Anyway, this book is very well written so it gets lots of points for that alone, it has heavy topics like drugs and prostitution that can show some ugly truths on the matter.
Maybe it wasn´t the book for me, cause I feel torn when I think of the rating, the bad wasvery bad but the good was amazingly good. I´m certain that lots of people will love this book.
all in all I think that at least for me it was a 50-50 deal so I´m going to rate it 3 stars cause Ryan and Beth just didn´t made me buzz
I did like it but i´m just not crazy about it.