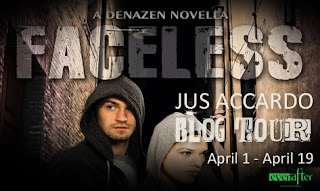 Woohoo!!! welcome to my stop on the Faceless Blog Tour, this book is amazing, well the whole series is amazing, so I had to jump in the opportunity to be part of this tour and here we are. I have a Review as part of my stop and a giveaway of a digital copy of Faceless bu Jus Accardo, you guys just need to enter the raffle at the bottom of the post and thats it!!!!


About the Book
My name is Brandt Cross, and I died. Again… 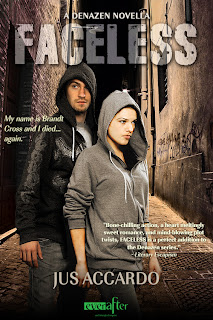 I'm living in the body of a Six named Douglass Cain, a certifiable scumbag whose ability is on Zendean Industries—AKA Denazen's—most wanted list. There’s some serious bad going down, and Ginger, the leader of the Underground, sent me undercover to obtain information because people are dying.
My cousin, Dez, is dying…
Denazen thought they’d found a cure for the Supremacy decline, but they were wrong. That’s the bad news. The good news? Franklin Wentz.
Wentz, the owner of a genetic research company, is brilliant and just a little bit crazy. He’s unwittingly created a formula that may cure the sick Supremacy kids, and everyone wants it—including Devin, the super hot Resident.
Get the formula. Save the day. Don’t fall for the hot spy. Piece of cake.

I soo love love love this book I was devastated when Brandt got offed and then cameback as sheltie, but at least he was still around even though it wasn´t completly himself.
This time Brandt is back, he´s trying to help his cousin Dez and to do so he has to inflitrate Zendean, long story short he´s now inside of Cain´s body  looking for the only thing that could help Dez.

It never was a secret how muc I like Brand he´s cure and a real gentleman his love for his family and wha he´s wiling to do for them wins him a huge piece of my heart.
There´s one thing on this book that made me love it even more, Brandt´s affirmations big heart here, he uses them as a reminder of who he is, and it gave me an amazing idea of who he is despite everything that has happened.

Devin is super cool, she´s not only beautiful but she´s smart, and becomes a sidequick of sorts. Wait till you meet her she´s super cool in a Dez kinda way.

I thing that had me pulling my hair out was the fact that I knew who was the third man, I always knew!!!! and all i wanted t do was to tell Brandt, I wanted him to noticed what I noticed, to see the sign.

This book is in one word amazing I loved it cover to cover I wish it was longer I could be days reading abot Brandt he´s super lovable, I´m crossing fingers hoping we get more of Brant  and Devin in the upcoming boooks.

Faceles is a super quick, easy read that will leave you wishing for more. it has the perfect amount of pointers to remind fans where they are at in the story but can be read even if you are not a fan.

I just have one more think to say and that is...

Wentz you are lunatic but fantastic!!! 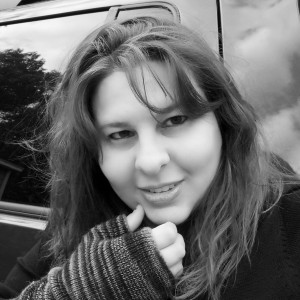 Jus Accardo spent her childhood reading and learning to cook. Determined to follow in her grandfather’s footsteps as a chef, she applied and was accepted to the Culinary Institute of America. At the last minute, she realized her path lay with fiction, not food, and passed on the spot to pursue writing.
Jus is the bestselling author of YA paranormal romance and urban fantasy fiction.
A native New Yorker, she lives in the middle of nowhere with her husband, three dogs, and sometimes guard bear, Oswald. Her first book, Touch was released in November 2011 from Entangled Publishing. She is currently working on the next book in the Denazen series.

Giveaway!!!!
All you guys have to do is fill the raffle and thats it Good Luck guys!!!!
a Rafflecopter giveaway


Dont forget to visit the previous stop  at

and tomorrow go and show some love at