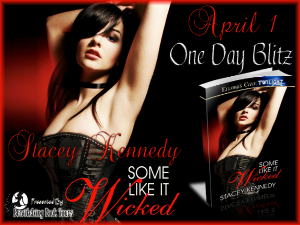 Welcome, to my stop today I have a giveaay for you guys, a very wicked excerpt of this title and everytthing there is to know about it, so please read along have fun and good luck with the giveaway 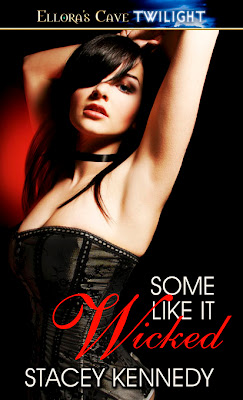 Stacey Kennedy
Publisher: Ellora’s Cave (Twilight)
ISBN: 9781419942235
Length: Novella
Heat Level: Sizzling
Release date: March 1, 2013
Book Description:
Bryanna is far from the perfect witch. Shunned by her coven and her boyfriend for her unruly magic, she seeks a new life for herself in a new town—Charmstone.

When Bryanna arrives in Charmstone, Zeke, a demon gone good, is burning with fire over her. Not only has she set his world ablaze, but he’s found one soul he can save. He’s determined to free her from the insecurities that have damaged her soul.
Together they experience lava-hot passion as they weave their way through a tornado of emotions. But when Bryanna’s ex returns for her, Zeke will need to take a stand and hope that their lust leads to a forever love.
Publisher’s Note: This story was previously published elsewhere under the title Whatnots & Doodads in 2011, and has been revised and expanded for Ellora’s Cave.
Amazon     BN    ARe    Ellora’s Cave  Books on Board  Kobo 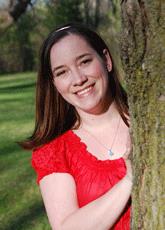 Stacey Kennedy writes romance that sometimes gets very naughty. She’s an urban fantasy lover at heart, but she also enjoys losing herself in dark and sensual worlds. She lives in Southwestern Ontario with her husband who gave her a happily ever after. Together, they have two small children who can always make her smile, and who will never be allowed to read mommy’s books. If she’s not plugging away at a new story, you’ll find her camping, curling up with the latest flick, or obsessing over Sons of Anarchy and Games of Thrones.