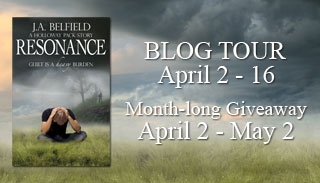 Welcome, to my stop on the Resonance Blog tour!!!!! YAY!!!!
Have I tell you lately that I adore J.A. Belfield she´s an amazing author and amazing person, funny, think of a quality she has it.

She also has a super dupper amazing giveaway and I managed to get an excerpt of her book  For Your Eyes Only!!!! 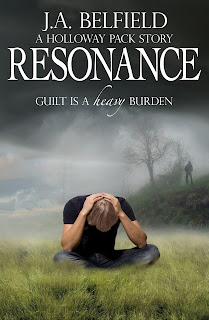 Jem Stonehouse is no exception to this rule.

For one, youngest pack member Josh Larsen wouldn’t be trapped in the sleep of the dead.

Now, Jem is convinced it’s her job to bring him back to life no matter what it takes— learning more about her heritage, risking pack exposure, or travelling to places she couldn’t have imagined possible.

Even if the journey endangers her soul.
Excerpt:
Whiteness reflected back at me from the ceiling above—a blank canvas of nothingness. For two weeks, I’d spent a few hours each day in the lilac bedroom. For two weeks, I’d prayed for a miracle. For some kind of enlightenment. Or at the very least, for Jess to find a way to wake up Josh.
Some days, the emptiness dulled my senses to a warble of incoherency. Thankfully, on those days, Sean came to my rescue, reminding me life still existed beyond the four, pale purple walls. Somehow managing to convince me that everything would work out.
If Sean believed Josh would awaken, what right did I have to dispute him?
If the rest of the pack believed, who was I to douse their flames of hope?
Yet, no matter how many hours, how many days, how many weeks I spent at Josh’s side in a show of optimism, the ache in my heart belied any positivity I feigned.
Rolling onto my side caused the mattress to dip, but even that jostle didn’t stir Josh. I flicked at an errant, dark blond curl, poked at his cheek. Still, he didn’t move, didn’t flinch, didn’t acknowledge my prodding.
Again.
Poor kid had probably been poked more in the past fortnight than he had his entire life.
As my heavy sigh eased out, footsteps ascended the stairs outside the room. I knew from sound alone who they belonged to, didn’t even need to inhale to confirm. That didn’t stop me, though, and my lids lowered as my mate’s bouquet found home within my olfactory.
Seconds later, Sean’s body filled the doorway and cast a shadow across the carpet. “Hey.”
“Hey,” I whispered without looking up.
“Anything?”
I tapped my fingertip along Josh’s jawline, willing him to react yet knowing he wouldn’t.
Josh hadn’t moved the entire two weeks he’d been under. Heck, we’d barely moved him. No toileting. No sweating. He didn’t seem to feel, hear, taste, see or smell.
All thanks to being in a death sleep, Jess had said.
I slaughtered the witches responsible for putting Josh under—for bewitching him in the worst possible way. At the time, their deaths had seemed fitting. That had been before I realised Josh’s predicament.
With a small head shake, I rubbed my hand along Josh’s arm as if the friction would help a body lacking in heat. “I’ve been thinking.”
“Thought I heard the turning of rusty cogs.”
My gaze skittered to the left and landed on Sean’s lopsided smile. Dark hair stood on end above dark eyes staring back at me. All male, all muscle, all mine, Sean Holloway got me like no other.
“You going to make me pry it out of you, Jem?”
Rolling my eyes at the suggestiveness of his tone, I brushed a kiss across Josh’s cheek and wriggled off the bed. At the door, I grabbed Sean’s hips and steered him backward across the landing and into our room.
His left eyebrow arched up. “You do want me to pry it out of you.”
I breathed out a laugh as I trotted over to the bed and sat crosslegged, tugging him along with me until he mirrored my pose. Nudging his hand up, I placed my palm flat against his, studying
the size difference as male dwarfed female in a way I rarely noticed. “I’ve been thinking about what you said.” 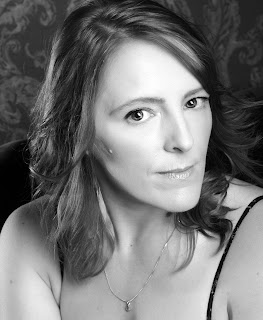 Best known for her Holloway Pack Stories, J.A. Belfield lives in Solihull, England, with her husband, two children, three cats and a dog. She writes paranormal romance, with a second love for urban fantasy.

Links:
Website | Blog | Facebook | Twitter | Goodreads
Julie has an amazing Giveaway for you guys, see!!! I told you she was amazing!!! read on to check out what se has for you!!!!! ohhh and


April 2nd 2013 marked the official release of Resonance upon the world, and yes, Resonance is available to purchase at all of the usual outlets. However, because I love and appreciate my fans so much, I decided to go on a mission to give something back.

Thanks to my super-duper editor, I’ve been granted permission for the following.


I vow to give away a FREE copy of Resonance to everyone who submits a valid entry between April 2nd and May 2nd (inclusive).

On top of that, one main-prize winner will receive a Holloway Pack swag-bundle (see image).

So, what do you have to do to enter?

Here's the deal. You can enter in any (or all, if you wish) of the following ways:

1)
Post a picture of you with your precious copy or Blue Moon somewhere on the Internet.
It does not have to be a hard copy (paperback); it can be the cover image on the screen of your Kindle/e-reader/reading tablet. No, pdf's do not count. If you have a pdf, then it's most probably an illegal copy, and so will only upset me.
Once said picture is posted, link me up so I can see it. If you stick it on FB, then tag me, but remember, I have a space (for some bizarre reason) between my initials on there. So, make sure you use @J. A. Belfield in your tag. NB: There will be a space in the Rafflecopter form to paste in a link to your pic, also, just in case I miss any or the tagging doesn't work. If you stick it on Twitter, then be sure to mention: @JABelfield so I can see your entry. And if you happen to stick it anywhere else, then be sure to forward a link to the post to j.a.belfield72 at gmail.com and include 'The Big Resonance Giveaway' in the subject line.

2)
Post a review for Blue Moon.
Obviously, I'd prefer amazing ones, but I get that my writing won't jive for everyone, so any review over 100 words will be accepted, even if it doesn't rave and include 4/5 stars. However, I will read each review carefully (because I always do), and ascertain that I believe the book has actually been read rather than a review being composed out of a rewrite of the blurb (yes, this does happen on occasion).
Where you post your review is up to you. On Goodreads. Amazon. B&N. On your blog. Completely up to you. But the Rafflecopter form will have separate entry options for each of these places, and each one will be included as an entry toward the main prize.


Off you go, go, goooo!
J.A. Belfield
a Rafflecopter giveaway