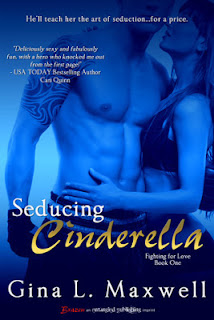 Adult Book Review
File Size: 283 KB
Print Length: 155 pages
Publisher: Entangled Publishing
(Brazen) (July 20, 2012)
Sold by: Amazon Digital Services, Inc.
Language: English
ASIN: B008NGFLPC
Mixed martial arts fighter Reid Andrews’s chance to reclaim his title as light heavyweight champ is shattered when he’s injured only months before the rematch. To make sure he’s healed in time, his trainer sends him to recuperate under a professional’s care—Reid’s best friend’s little sister, all grown up.
Disorganized and bookish Lucie Miller needs some professional help of her own. She’d do anything to catch the eye of a doctor she’s crushed on for years, so when Reid offers seduction lessons in exchange for 24/7 conditioning for the biggest fight of his career, Lucie jumps at the chance. Soon Reid finds him himself in the fight of his life...winning Lucie's heart before she gives it to someone else.


OMFG who would have thoutgh that an MMA fighter could be so hawt, delicious, sexy, drop dead gorgeous... *breaths in breaths out*  He really is HAWT. *fans herself*
When Reid goes to see a new PT he never expected her  to be his best friends little sister and when he sees that she is in need of his help too well thats a win, win situation right???? ... Wrong!!!!!!!!
Inn exchange to be his PT 24/7 Lucie wants one thing,for Reid to teach her how to seduce a man who doesn´t even know she exists.
Lucie is a sweetheart, she´s just your average girl, she thinks herself plain and incapable to awaken any kind of hunger in a man, she doesn´t realize how amazing she is. but Reid does and that´s where this book gets pretty wicked amazing.
Reid is the kind of guy that know what he´s got and sure as hell knows how to use it, this guy is sex on legs and he is willing to bring the heavy artillery to show Lucie that he is a far more better match for her than some lame arss Dr. could ever be.
This two where meant to be together, I adored this couple from the start, they are simply perfect for each other, she is the yin to his yang, sort of lol!!!!
What I liked the most was the fact that even though Reid has this whole bad guy attitude and looks going on, he truly is one of a kind, he is completly trust worthy, dependable, romantic and super, super sweet.
If you dont believe me check this out

"My heart's just not in it anymore." His eyes searched hers as though hoping to see that she understood, but he wasn't sure she did.
"Then where is it?"
"With you, Lucie. My heart is with you."

Can you say Mayor Swoon!!!!