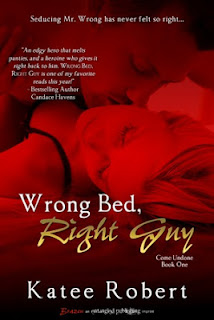 Adult Book Review
File Size: 253 KB
Print Length: 144 pages
Publisher: Entangled Publishing
(Brazen) (July 20, 2012)
Sold by: Amazon Digital Services, Inc.
Language: English
ASIN: B008NIJK9I
Prim and proper art gallery coordinator Elle Walser is no good at seducing men. Heck, she’s been throwing hints at her boss for months, but he’s completely clueless. Desperate to escape her mother’s matchmaking efforts, she comes up with a plan—buy some lingerie and climb into her boss’s bed. The plan goes brilliantly…until she accidentally seduces a sexy stranger instead. Bad boy nightclub mogul Gabe Schultz just had the best almost-sex of his life. Too bad the smoking hot blonde thought he was his brother and bolted before he could finish what they started. Though her holier-than-thou attitude puts a serious damper on his mood, Gabe’s never been one to give up on something he wants. And he wants Elle. But does a man who lives on the dark side really have a chance with a proper lady? 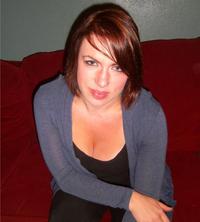 Katee Robert learned to tell stories at her grandpa's knee. Her favorites then were the rather epic adventures of The Three Bears, but at age twelve she discovered romance novels and never looked back.
Though she dabbled in writing, life got in the way--as it often does--and she spent a few years traveling, living in both Philadelphia and Germany. In between traveling and raising her two wee ones, she had the crazy idea that she'd like to write a book and try to get published.
Her first novel was an epic fantasy that, God willing, will never see the light of day. From there, she dabbled in YA and horror, before finally finding speculative romance. Because, really, who wouldn't want to write entire books about the smoking-hot relationships between two people?
She now spends her time--when not lost in Far Reach worlds--playing imaginary games with her wee ones, writing, ogling men, and planning for the inevitable zombie apocalypse.
For more info on Katee´s books go here:
Website
My Review


Elle is the epitome of Murphy´s law, everything that can go wrong will go wrong. Good thing for her that Gabe was there to make everything, ohh so right!!!!!

She´s really cute and endearing but so infuriating at the same time, she works as a coordinator at Nathan´s Art Gallery and is waiting for the right time to seduce her boss cause he is everything her mother has told her she needs to have a healthy relationship, or so she thinks LOL!!!

Gabe is The bad boy, he has lived the life and done the deed more times than he care about, but he wants to settle down and have a normal content life. Then he meets Elle...
Love the dynamics of this couple and te whole I hate you but I want you was ZOMG!!!!! Brilliantly done.

I have to say that I´m a sucker for Bad boys, attitud is everything and this guy knows how to pull it off, he´s funy, sexy and an honest to god almost boy scout that just happens to look Yummy as hell.

I really liked this book, It´s a very easy fast paced read that left me wishing for more.

This is exactly the reason why I´m always looking for Entangled´s books, amazing titles such as this one, all in one place!!!!!!!!!!!!!!