Hi guys, I´m really really glad to have read both Touched and Untouched on one sitting, I really enjoy Jus Accardo writting style and well I have both review for you today =D cool right?? and eve  cooler is that I started Toxic as soon as I finished this two so... Hell Yeah!!!! I´m Hyper... Book Review
Reading level: Ages 15 and up
Paperback: 400 pages
Publisher: Entangled Teen; Reprint edition (July 3, 2012)
Language: English
ISBN-10: 1620610132
ISBN-13: 978-1620610138
When a strange boy tumbles down a river embankment and lands at her feet, seventeen-year-old adrenaline junkie Deznee Cross snatches the opportunity to piss off her father by bringing the mysterious hottie with ice blue eyes home. Except there’s something off with Kale. He wears her shoes in the shower, is overly fascinated with things like DVDs and vases, and acts like she’ll turn to dust if he touches her. It’s not until Dez’s father shows up, wielding a gun and knowing more about Kale than he should, that Dez realizes there’s more to this boy—and her father’s “law firm”—than she realized. Kale has been a prisoner of Denazen Corporation—an organization devoted to collecting “special” kids known as Sixes and using them as weapons—his entire life. And, oh yeah, his touch? It kills. The two team up with a group of rogue Sixes hellbent on taking down Denazen before they’re caught and her father discovers the biggest secret of all. A secret Dez has spent her life keeping safe. A secret Kale will kill to protect. 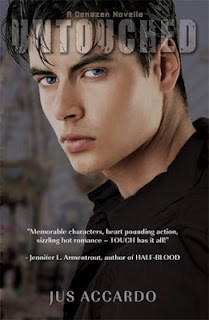 Book Review
File Size: 411 KB
Print Length: 78 pages
Publisher: Entangled Publishing (March 27, 2012)
Sold by: Amazon Digital Services, Inc.
Language: English
ASIN: B007PEV6DY
Until he met Dez, Kale’s days were filled with violence and death. He was used as a weapon of destruction by the power hungry men of Denazen. He’s a Six. A person with an abnormal ability. Some people call them gifts, but not Kale. Kale’s touch means instant death. But now there’s Dez, the girl he can touch, and they’re hunting down Sixes and warning them about Denazen. Kale is learning about the world outside captivity and trying to put his dark past behind him. But they underestimated how badly Denazen wanted him back. When Dez sacrifices herself to save the new Six they’d rescued from falling into the corp’s hands, Kale is lost. Denazen has brought out its best to get the job done. Samsen, a nightmare from Kale’s past—the only person he’s ever truly feared—has come for them, and it soon becomes obvious he has his own twisted agenda. Kale will need all his training to get Dez back and ensure they make it out, free—and alive. But will it be enough?

First off I need to say just WOW, no wonder everyone was drilling me about reading this series, is freaking amazing. I love the characters,  I love the plot, the writting style is superb yeah I dig this read a lot.

When I started to read the Touched and Kale appeared my first thought was "what´s his deal" but as the story progressed everytime he opened his mouth I was like this.

obviously that he looks completly yummy has nothing to do with it LOL!!!
Kale is so cute, adorable and innocent that is completly HAWT , I don´t know how Dez do it,I would turn into pudding just looking at his eyes.

our coversation would go like this; He would say Hi and I would

Yeah that about sums it up


Dez is a kick ass chick, she´s smart mouthed and withy and she really cares about Kale and what he had to go through while growing up and the fact that Daddy Dearest played a big part on all things Denazen rocked her world forever.
This book is fast passed, full of action and very romantic, I didn´t find a single thing about it I didn´t like. Maybe just the fact that I know something bad is going to happen really soon just for the ending alone. I´m worried about them, cause after everything Kale has been through he deserves a HEA more than any character I´ve known.
So,  without delay as soon as I flipped the last page on Touch I grabbed my Kindle and started reading Untouched. Ohh my freaking God.
Untouched is a super easy and short read but that doesn´t make it any less impresive than Touched I was glued to it exaclty the same way and I devoured each and every single one of Kale´s words. The fact that is Kale´s Pov was...

Yup this was me!!!!!
loved the plot, it has action, romance and the right amount of angst, really cool of you ask me. I loved Dez but being inside of Kale´s head was priceless, he has the must funny and innocent thougts ever. Kale struggles between the man he believes to be and the man he thinks Dez see; the way she centers him and makes him aim to be "good" to be better is endearing.

So if you haven´t read this series yet this is a really good time, not only you wont have to wait for book two cause as I said before it´s already out but you can read them back to back. How Cool is that!!!!

So do the Clicky, Clicky to the links below and get them all!!!!

Ohh BTW Faceless Denazen  book #2.5 comes out sometime next month so we wont have to wait long for that one either.