The day has come and is my turn to show you Something really wicked... but first I want to thank  Lila at Babbling About Books and Heidi at Rainy Day Ramblings for hosting this amazing event. Without you October wouldn´t be as fun.

Now, Now for my stop I want to introduce you to an AMAZING (see the all caps???) author. She is funny, withy and her books are sexy as Hell, So I was obviously drawn to her work, and Oh Boy did I got what I was looking for!!!. 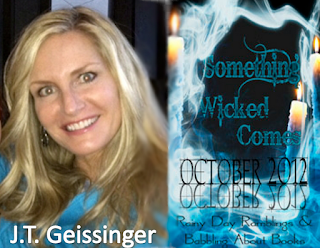 A life-long lover of reading and a self-professed “Book Addict,” (see my blog name? =D) J.T. Geissinger didn’t realize her dream of writing a novel until a milestone birthday forced her to take stock of her goals in life. Always believing the right time to commit to putting pen to paper would magically announce itself, it took waking up one cold January morning with a shiny new zero as the second number in her age to kick start her determination.
Starting on that very day, she wrote what would become Shadow’s Edge in a little over four months and submitted it to several literary agents. Nothing happened. Thinking that was the end of that but by no means willing to give up on her dreams of being published, she began work on a second manuscript.
Then, during a trip to Italy in honor of their 10th wedding anniversary and the honeymoon she and her husband never took, she received an email that would change her life. It was from an agent, Marlene Stringer of Stringer Literary, and it contained the three words every aspiring author longs to hear: “I loved it.”
Marlene sold the manuscript, initially titled The Skinwalker’s Daughter, to Montlake Romance who published it six months later. Hitting the #1 Amazon bestseller lists for Fantasy Romance in both the US and the UK within weeks of publication, Shadow’s Edge is the culmination of the refusal to give up (some would say grow up) with the staunch belief that all good things come to those who wait…and sometimes to those who wait longest.
Book one of the Night Prowler Novels, Shadow’s Edge was followed by Edge of Oblivion earlier this month, and Edge of Surrender in spring 2013.
*****
Now, lets talk books shall we...
The Night Prowler Series currently has two titles  Shadow´s Edge and Edge of Oblivion 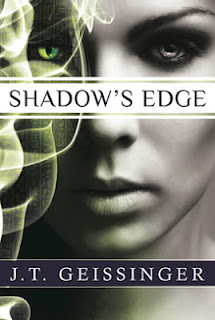 Shadow´s Edge was released on June 12th Here is the Blurb :


Deep within the primeval forests of southern England, a race of beautiful, savage shape-shifters lives hidden from the everyday world. Bound together by ancient bloodlines and a ruthless code of secrecy that punishes traitors with death, the Ikatisend their leader Leander on a mission to capture one raised outside the tribe before she can expose their secret. When Leander tracks the unsuspecting outsider to Southern California, the hardened warrior is prepared for a fight—but not for the effect the sensual young beauty has on his heart.
Jenna spent her childhood in hiding, on the run from someone—or something—her parents refused to discuss. She trusts no one, not since her father’s mysterious disappearance, not since her mother’s sudden death, and definitely not since she began exhibiting strange, superhuman abilities. When handsome, enigmatic Leander appears, promising answers to the mysteries that shroud her past, she knows she shouldn’t trust him either. But their connection is undeniable, and as powerful as the enemy hell-bent on destroying every one of their kind…

Nice Right?.. Now Edge of Oblivion (the one Im giving away by the way) is Fanfreackingtastic!!!! 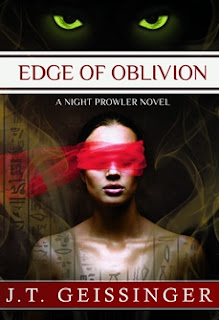 In a dark underground cell, Morgan Montgomery waits to die. A member of the Ikati, an ancient tribe of shape-shifters, Morgan stands convicted of treason. And Ikati law clearly spells out her fate: death to all who dare betray.
But there is a glimmer of hope. Thanks to her friendship with Jenna, the new queen of the Ikati, Morgan has one last chance to prove her loyalty. She must discover and infiltrate the headquarters of the Expurgari, the Ikati’s ancient enemy, so they can be destroyed once and for all. The catch? She has only a fortnight to complete her mission and will be accompanied by Xander Luna, the tribe’s most feared enforcer. If Morgan fails, her life is forfeit. Because Xander is as lethal as he is loyal, and no one—not even this beautiful, passionate renegade—will distract him from his mission. But as the pair races across Europe into the heart of Italy, the attraction blooming between them becomes undeniable. Suddenly more than justice is at stake: so is love.
Sensual, thrilling, and action-packed, Edge of Oblivion will enthrall readers with nail-biting suspense and heart-pounding passion.
Yes!!!!!!,it sounds good right,here is my review just in caseyou want to know what I thought about it and why I want to share this beauty with you guys.


Ohh yes is Hawt in here, I loved, this book not only does the cover fits perfectly with the story but the plot is amazing, I really loved it all. BTW did I mentioned that this is an ADULT book?, no? really? well then, if you are under aged please dismiss this post. LOL!!!
Anyway Xander and Morgan are a perfect fit, I loved that Morgan is a strong independent woman that isn´t willing to submit to what everyone else expects form her. She is willing to put everything she´s ever know at risk for a chance at freedom. Xander is your average killing machine, hes very dark and oh so very dangerous. None of them have had it easy,but they found a twisted way to live that worked perfectly fine until Morgan becomes a traitor and Xander gets his next mark.
The dynamic between this two characters flows perfectly and I really liked the way these two strong personalities clash together,both ill tempered and in dire need of an anger managment class; this book got me grinning more than one time.
Naturally all that anger only served to ignite some sparks that sure as hell almost lit up my screen like the 4th of July.
This is most def. an author I´ll put on my auto buy list. yeah this book is really that good; also It can easily be read as a stand alone even though is part of a series.
Plus you get to read a lot of smoking hot scenes about a guy/shifter that looks like this. 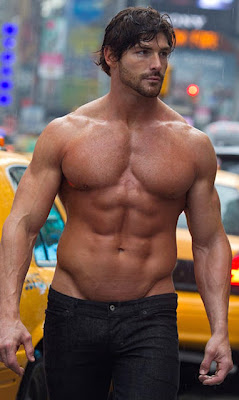 Oh My!!! yes I knew this would get your attention LOL!!!
ohh and just in case you are wondering I liked him a lot
*****
Well now, J.T. Geissinger has some inside info about how the Night Prowlers came to be and then I have a giveaway for you...

Hi J.T. thanks for dropping how Did you get the idea for the Night Prowler Series?


It all started with a stray cat. I own a business located very close to a large feral cat colony, and have adopted three strays (so far) that have wandered in, looking for food. (As anyone who’s ever fed a stray cat before knows, once you feed them, they never leave.) So one day an incredibly sleek, beautiful female cat appears out of the blue, demanding a meal. She looks like a miniature panther, all black with bright yellow/green eyes. I fell in love. I named her Angelina (after the equally slinky/beautiful Ms. Jolie) and adopted her.
This cat has an uncanny ability to disappear. One minute she’s there, looking at you as if she’s just about to say something, the next she’s gone—poof!—as if she was never there at all. It must be a feral cat trick, but it got me to thinking.
I’d written a book (never published) about angels and demons and other supernatural creatures, so I thought shape-shifters might be an interesting thing to try next. And what better shape-shifter than one that can disappear into mist? Like the Cheshire cat from Alice in Wonderland, or Dracula, the original shape-shifter who could turn into mist (and a bat). And because I’m one of those crazy cat ladies who will die alone in a one bedroom apartment with dozens and dozens of cats and has never lived without at least one cat since I was five years old (a long time ago), I put the idea of shape-shifting cats into motion.
Two things occurred to me immediately: one, there are a lot of people who hate cats. Two: the Egyptians revered them. Put those two things together and mix in a big bowl, and you’ve got a race of cat shifters worshipped as gods by the ancient Egyptians who’ve had to hide because they’ve since been hunted by humanity. I spiced it up with some historical nuggets about Egypt, the Inquisition, witch hunts, religion, Rome…it goes on, but you get the idea.

How many books are you planning on doing in this series?


I’d love to do five. Six is too many and four is too few to tell everyone’s story that I want to tell.

Are you planning on any other books or series?


Well….yes, actually. I’m currently writing book three in the Ikati series and a character just showed up who may or may not be a Scottish werewolf. I have to see how much he wants me to know as I write this book, so I can’t say for sure if I’ll be doing a werewolf series. Other than that, I have several other things percolating, including a story about a vampire who works at a blood bank.

Thanks so much for your visit, I cant wait to read the next installment on this series, you have such amazing Characters that I want to know all of their stories.


*****
Now guys for the giveaway
I´m giving away an Ebook of this amazing book all you guys have to do is enter the raffle below and cross your fingers,for a chance to get this amazing book. BTW did I mention that this is a very very good but very adult book?, no? well then you know the drill you need to be at least 16 to enter and the rest is history, a really really good,Hwat,drool worthy... sorry... I´m rambling again.


Good luck guys and may the shifter be with you...
a Rafflecopter giveaway