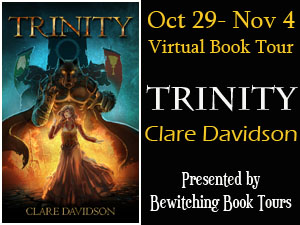 Hi guys, today is my turn to host a stop on the Trinity Blog Tour and as part of my stop, I have a really cool excerpt of this book but most important  is that Clare Davidson agreed to come here today to talk to us for a bit. =D 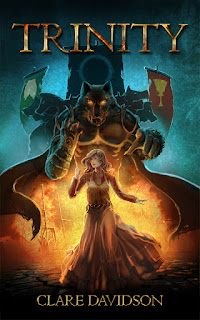 About the Book
Kiana longs to walk through a forest and feel grass between her toes. But she is the living embodiment of a goddess and has enemies who wish to murder her. Her death will curse the whole of Gettryne. Locked away for protection, she dreams of freedom. Her wish comes true in the worst possible way, when her home and defenders are destroyed. Along with an inexperienced guard and a hunted outcast, Kiana flees the ravages of battle to search for a solution to the madness that has gripped Gettryne for a thousand years. Pursued by the vicious and unrelenting Wolves, their journey will take them far beyond their limits, to a secret that will shake the world.
*****
“Switch clothes.”
Kiana blinked at Finn. It was such a simple order but she couldn’t make her arms move to obey him.
“Now!”
Slowly, Kiana turned to look at her handmaid. Erynn’s eyes were red and puffy, her face smudged with dirt from the tunnel and her blonde hair dishevelled. The girl’s shoulders shook as she pulled the plain brown surcoat over her head and held it out to Kiana. Like Kiana, she also wore an undyed woollen underdress that preserved modesty. Kiana stared at the surcoat and then at Erynn. Her lower lip trembled and a lump formed in her throat that threatened to choke her.
“Now, Kiana!” Finn kept glancing towards Ciall, who was standing at the tunnel entrance.
Sunlight filtered in, providing enough light to see by deeper in the tunnel. Kiana could hear the sounds of fighting in the distance. Swords clanged against each other, feet thundered over wood and men screamed. She clamped her hands over her ears and sank down so that she was crouching.
Finn was shouting at her. Kiana shook her head and squeezed her eyes tightly shut. She wouldn’t listen. How could he ask her to send Erynn out to die?
A pair of hands closed over hers and pulled them away from her ears.
“Kiana.”
Kiana couldn’t immediately put a name to the gentle voice. Slowly, she opened her eyes. Nidan was crouching in front of her, eyes alert, body tense, but there was a kindness in his face.
“We don’t have time to think,” he said. “You need to do as Finn says.”
“But…”
“Don’t think.” He was right. “You have to live.”
Right again. She stood and pulled her surcoat off with numb fingers. Erynn helped her into the rough wool garment. It irritated the nape of her neck. It doesn’t matter! She watched as Erynn pulled on the golden surcoat. Kiana had always wondered why she and Erynn looked so alike. Now it was clear: Erynn was the perfect decoy. Kiana shivered violently. Her stomach lurched. She turned away and threw up. Once she had recovered, Nidan offered her a scrap of cloth. She cleaned her mouth and then managed to force a grateful smile to her lips.
“We split into two groups,” Finn said. “Bran and Coran will take Erynn.” He looked at Nidan. “You’re with me and Ciall.”
Kiana had enough wits to see Nidan’s eyebrows raise as his mouth dropped open. Under different circumstances, his expression might have been comical.
“Let’s go!”
She forced herself to follow Finn out of the tunnel, expecting to see Wolves at any moment.
Finn must have sensed Kiana’s nervousness. He paused and glanced at her. “From what we could see, the Wolves are concentrated around the moat. It’s unlikely they’ll find this entrance.”
Kiana nodded. They had run through the tunnel for what felt like an eternity, and the fighting sounded so distant. Despite Finn’s assurances, Kiana stared after the other group as they vanished into the forest. They had to stay safe. They had to.


*****
Now,lets welcome Clare Davidson, who is going to share something really cool with us.


The Night Before the Assault
I thought I'd share a short scene that takes place before the opening chapter of Trinity:
The camp was quiet. The Wolves hadn't lit any fires–it was too much of a risk. Skaric lay on a rough blanket, staring up at the night sky. A blanket of stars spread above the camp, the only witnesses to the Wolves' presence at the edge of the forest. Inside was Blackoak Tower, allegedly the home of the incarnation of Miale.
"Can't sleep?"
Skaric didn't need to see Vali to recognise his friend. He tucked his hands beneath his head. "I'd rather be on watch."
Vali chuckled. His bedroll plopped to the floor beside Skaric and he absently kicked it out. "We're far too important to waste our energy on watch, Skaric," he said in a mocking tone.
Skaric rolled his eyes.
"Do you think we really will find the Miale bitch in that tower?"
Skaric shrugged. "That's what we've been told."
Vali stretched out on his side, propping himself up on his elbow so he could face Skaric. "People lie… even under torture."
Neither of them had been present. They hadn't seen the man's face or heard his words. Only Berend had.
"The war leader doesn't do anything that has the potential to make him look bad." Skaric kept his voice low. "Berend must be sure she's there." The name tangled on his tongue and left a bad taste in his mouth. It was no secret that they didn't get along.
"It could be a decoy."
A smile spread across Skaric's lips. "We'll know."
Vali flopped onto his back. "Oh yes. Her telltale amber eyes. What if that's just a myth?"
"You're very pessimistic tonight," Skaric chuckled. "It's a fact that's been handed down from Alpha to Alpha for a thousand years. It's true." He felt the strength of his conviction in his words. "A god cannot inhabit a mortal body without leaving a physical mark."
He closed his eyes, allowing the subdued sounds of the camp to wash over him. Hushed voices chatted in scattered clusters. Horses snorted and swished their tails. Leather creaked under the pressure of heavy-handed polishing. The stench of unwashed men and horse dung made the air in the camp uncomfortable to breathe. Tension filled the air, carried by anxious whispers and unseen stares.
"At least Berend is the one who'll face your father's wrath if this is a waste of time," Vali said.
Tension coiled in the pit of Skaric's stomach. He opened his eyes. The sky seemed even blacker, the stars more accusing.
"If we fail…"
"We won't fail," Skaric snapped. They couldn't. He rolled over, turning his back on Vali. "Get some sleep."
He held his breath for several heartbeats until Vali's grumbling and shuffling subsided. He tugged his blanket around his shoulders, but still shivered. He would be glad when the assault was over, no matter what the outcome. 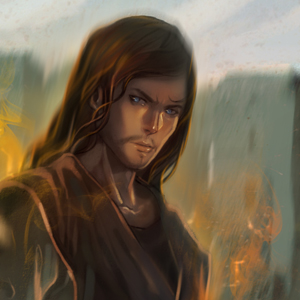 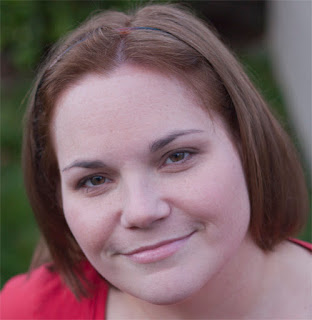 Clare Davidson is a character driven fantasy writer, teacher and mother, from the UK. Clare was born in Northampton and lived in Malaysia for four and a half years as a child, before returning to the UK to settle in Leeds with her family. Whilst attending Lancaster University, Clare met her future husband and never left. They now share their lives with their young daughter and a cranky grey cat, called Ash. Clare juggles family life with writing, teaching and a variety of fibre craft hobbies.
You can stalk Clare on all her links
Website
Facebook
Twitter
Goodreads

Dont forget to enter the tour wide giveaway for

one signed paperback and a set of 3 bookmarks
5 ebook copies, via a Smashwords coupon
Enter the Raffle below and...
Good Luck Guys!!!
a Rafflecopter giveaway